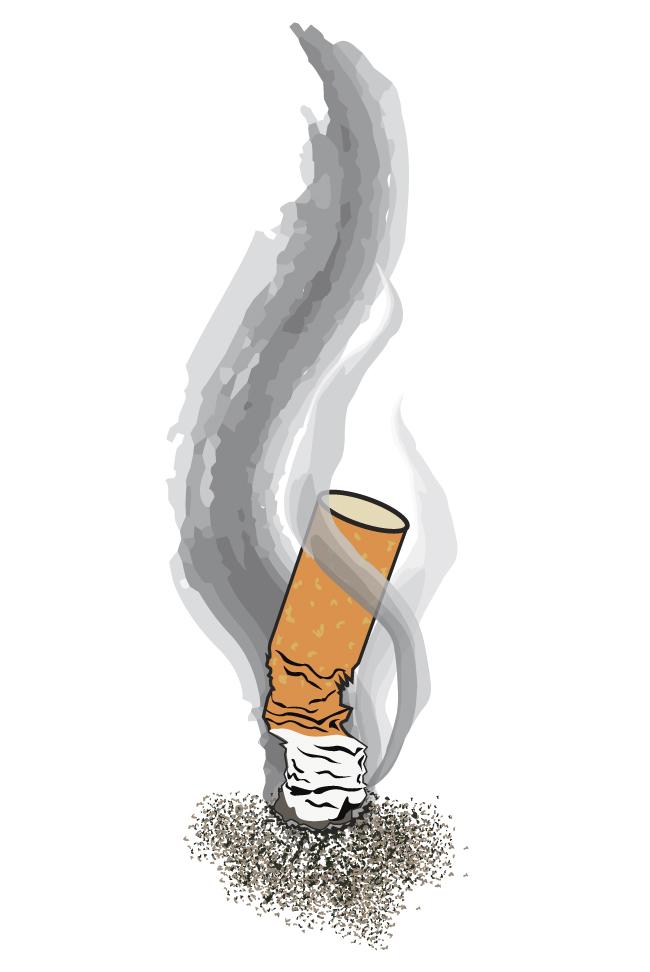 More than 75 percent of respondents answered “yes” to a question of whether or not CSUN should be smoke-free in a campus-wide survey issued last semester.

Matt Terhune, a staff member in the college of social and behavioral sciences, is a smoker. He believes the ban could be a gentle nudge in the right direction for smokers like himself.

“I think it’s a good idea,” Terhune said. “I think it’s extremely difficult to quit and the less convenient it is to smoke, then the less likely I am to do it.”

President Dianne Harrison appointed the Task Force on Becoming a Smoke-Free Campus in November to discuss the initiative. The task force is chaired by Linda Reid-Chassiakos, director of student health services, and Diane Schwartz, a professor in the department of computer science.

“Input and feedback from the university community, which includes smokers and nonsmokers, is critical,” Chassiakos said. “The task force is considering the survey results, as well as other forms of input such as emails from students, faculty, and staff. The task force has been asked to provide recommendations to President Harrison about whether CSUN should implement the policy and if so, how.”

There is not full support for a smoking ban at CSUN, the survey showed. About 21 percent of both smokers and nonsmokers opposed the idea.

Benjamin Adi, senior health administration major, is among the non-smoking community that rejects the ban.

“It would be unfair to the people who smoke,” Adi said. “It kind of disregards the fact that they have a real addiction. It doesn’t really bother me that students smoke on campus.”

Adi also said he is concerned with the possible costs of the policy and if students would have to bear those costs through additional student fees.

“If they implement (the policy) and it costs me money, then I would be upset because the smoking never bothered me in the first place.”

“I think since CSUN is a very large campus, some people should be allowed to have designated smoking areas instead of walking ten minutes to go off campus just to smoke,” Shabani said. “You can’t even do it in between classes and some people really need a smoke to continue the rest of the day.”

There are about 1,182 smoke-free colleges and universities nationwide, according to Americans for Nonsmokers Rights (ANR). If CSUN does implement a campus-wide smoking ban, it would join the entire University of California (UC) system, Cal State Fullerton (CSUF) and San Diego State University (SDSU).

CSUF was the first Cal State University to become a smoke-free campus back in August 2013. Products prohibited in their ban feature tobacco products including pipes, cigars and e-cigarettes. The UC system, which has 10 campuses, as well as SDSU, have followed suit with smoking bans that began Jan. 1 of this year.

“I think the smoke-free policy is great,” said Jessica Maiden, senior business management major at SDSU. “I hate walking by people when they’re smoking. I shouldn’t be subjected to other people’s addictions.”

Maiden said she noticed people still smoking a week after the ban started, despite the many new signs placed around campus.

Most of the universities with anti-smoking policies have decided to implement them using “social enforcement,” which relies on the campus community educating each other on the policy and holding their peers accountable in maintaining a smoke-free environment.

Terhune supports the idea of social enforcement and thinks it would be successful at CSUN. He said if he were approached and asked not to smoke by a peer, he would definitely comply.

“I think a lot of smokers are courteous like that,” Terhune said.

The survey given to the CSUN community asked respondents to consider enforcement by campus police via ticketing, to which just over 75 percent indicated support for that punitive method of enforcement.

Enforcement is just one of the many issues the Task Force on Becoming a Smoke-Free Campus has to consider. Other concerns about the policy, indicated by the CSUN community through the survey, include the responsibility of the university to promote healthy lifestyles versus their responsibility to provide an atmosphere of openness and inclusion for student smokers.

Some respondents to the survey also suggested the university provide resources through the Klotz Student Health Center for the students who are not ready to quit smoking.

Many other campuses that have adopted the smoke-free policy have also made similar programs available to students, faculty and staff.

UC Berkeley’s University Health Services provides resources for those on campus ready to quit, including free Nicotine Replacement Therapy, which is a series of one-on-one counseling services to develop a “Quit Plan.” CSUF and SDSU also offer similar resources on their campuses.

Chassiakos suggested the administration is still early in the process of potentially instituting a smoking ban at CSUN.

“The task force has not yet made any recommendations to President Harrison,” Chassiakos said. “No new policy has yet been written.”