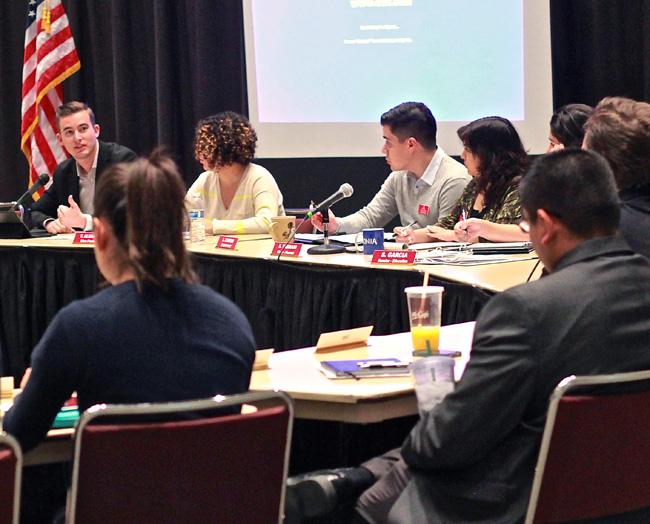 Associated Students (AS) discussed a proposed increase in funding for the California State Student Association (CSSA) at their meeting on Tuesday.

CSSA is an organization made up of AS presidents from the 23 campuses of the California State University (CSU) system.

According to their website, CSSA is one of the oldest statewide associations in the US.

CSSA is described as, “…an informed and active student association working with both the university administration and state legislature.”

Currently each campus’ Student organization pays a fee of $.65 per student per semester.

If the Board of Trustees votes in favor of the fee, it would increase to $2. This new fee would come directly from students.

Christopher Woolett, AS president said, “It is a voluntary fee. Any student that doesn’t want to (pay the fee) will be able to fill out a form.” The form will waive the fee.

“This is a conversation that has been going on for 4 years… maybe longer,” he said.

The fees would eventually be refunded to campuses, in the future, when there is better financial stability.

“That would mean that our campus would get our dues back, which we could put back towards some form of programming,” Wollett said.

If the CSU Board of Trustees votes in favor of the new fee, it could go into effect in Fall 2014.

Woolett stressed the importance of starting a campaign, “…to let students know what CSSA does and why they’re beneficial.”

He was optimistic about the chances of the Board voting in favor of the new fee. “I believe it is favorable right now,” he said.

The other main focus of the meeting was discussing the changes that administration made regarding the commencement ceremonies.

David Crandall, general manager, applauded the students and AS on their accomplishments.

“What you accomplished, the effort that you made, was one of the most inspiring cases of student advocacy I have ever seen,” he said.

He talked about how important commencement was and that next year’s AS president had some big shoes to fill.

Tom Piernik, university adviser, said, “I invite the next president to watch what we do.”

Other items of note that were discussed included the introduction of Zipcar to the campus and the new sand volleyball league.

Alexanian spoke about the Dreamers Resource Center at Cal State Fullerton. “We need one, even if it’s online at first,” she said.

Another proposal was an amendment to allow students in the Tseng College to pay a fee in order to participate in Intramural and Sport Clubs. Presently, only CSUN students are allowed in.