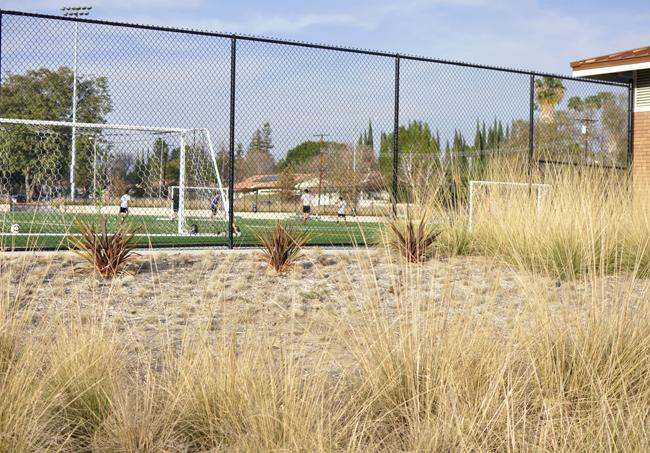 Drought-resistant plants were planted around the SRC athletics field where students can be seen playing soccer on the turf utilizing artificial grass to preserve water in Northridge, Calif.

As the drought and record-low rainfall have weakened California’s water supply, CSUN remains committed to sustainability as it has enacted a number of measures to reduce water consumption on campus.

The dry weather only produced 3.60 inches of rain in downtown Los Angeles, breaking previous record-lows of 4.08 inches set in both 1947 and 1953, according to statistics from the National Climatic Data Center. The shortage won’t cause a noticeable change in CSUN’s water usage in the short-term, said Bill Sullivan, Physical Plant Management (PPM) manager of energy and utilities.

“During the winter months, there might be increases and decreases in certain meters, but there is not a whole lot of difference in usage,” Sullivan said.

CSUN has already taken several steps toward making sustainability a priority on campus. Waterless urinals and low-flush toilets were installed in high-traffic areas to minimize water usage in buildings.

“The campus is very aware of the water situation,” said Helen Cox, Green Core Team chair for the Institute for Sustainability.

In May 2013, the Institute for Sustainability finalized a 10-year sustainability plan, which included goals to reduce water consumption by 15 percent, and increase awareness of water-related issues.

The Institute for Sustainability found that irrigation, bathroom use, student housing, campus dining services, evaporation from swimming pools and leaks in circulation and distribution pipes accounted for the majority of water use on campus.

“The two major users of water are irrigation and water in buildings,” Cox said.

Another large water consumer is the computerized, weather-based irrigation system, which may become strained with the onset of perpetually dry weather.

The irrigation system, installed in 2009, is comprised of 66 control centers that determine how much water is needed based on humidity and how much water from the root of a plant is released into the air. A weather station north of the softball field transmits information to the control centers, Logsdon said.

It forces us to monitor (the irrigation system) constantly,” said landscape and grounds manager Jim Logsdon regarding the conditions. “Right now, we’re doing what we can do. We’re cutting back where we don’t need to use as much (water). What we have to do is be conservative with when and how long we put it out.”

Logsdon said there are areas on campus that have higher priority than others when it comes to watering, like the lawns around the Oviatt Library.

Cox said the university can still take further steps in light of the drought.

“Because of the current situation, we can replace lawns where it is feasible with drought-tolerant plants,” Cox said.

Beverly Watson, associate director of operations for Student Housing and Conference Services, said housing facilities have been very proactive in working to reduce water usage by installing water-saving devices and encouraging students to be more cognizant of their water consumption.

Over the past three years, student housing has also transitioned to tankless water heaters and removed the boilers from the roofs of homes.

The grounds around student housing have also been remodeled, shifting toward a method landscaping and gardening called xeriscaping. Xeriscaping techniques are commonly employed because it allows different ground coverings, foliage and trees to flourish with little to no additional water than what is naturally provided.

The modifications have already shown promising results– the 2013 school year saw a 5.9 percent reduction in water consumption in student housing.

Watson said student housing has already laid out a water conservation goal for this school year.

“Three percent reduction is something within reason,” Watson said. “If we get to three percent, then we’ll move to the next goal.”

In addition to posting signs that encourage water conservation on the mirrors of bathrooms in housing facilities, student housing will be participating this spring in the Campus Conservation Nationals, a water and energy conservation program with other schools.

Within the competition, housing buildings will compete against one another with rewards offered as incentive, Watson said. By entering the contest, Watson said the university hopes it gets the students into sustainability.

For students that want to learn more about sustainability or contribute to the water conservation cause, the university offers several avenues for participation.

“The Institute for Sustainability offers courses 300 and 310, which explain where water comes from, the water crisis and why it’s going to get worse because of climate change,” Cox said.

CSUN will also participate in Water Day on Wednesday, March 19.

Cox said Water Day teaches students about the origins of water and hosts speakers from the water district.

For students who live off-campus, there are multiple ways they can conserve water congruent with their specific living situations.

“Watering lawns accounts for the majority of home water usage so you can buy drought-tolerant plants or replace sod with natural grasses,” Cox said regarding those who live in houses.

Apartment renters may find it more difficult to conserve as most tenants do not have direct access and control over the water usage within the building.

“You can push for installation of low-flow and low-flush devices, but there is a problem with renting because there is no incentive for landlords to replace devices,” Cox said.

In the event such options are not available, Cox suggested an alternative that may not be as readily accepted.

“Limiting showers to five minutes instead of 10 or 15 will make a big difference,” Cox said.

While the current situation does not dictate such measures be taken immediately, if the current pattern of weather persists into the summer, it may not be long before it becomes a necessity on campus.

“If conditions don’t improve, we might just have to start rationing water,” Sullivan said.