Women’s Tennis: New-look Matadors open season at home with a pair of wins 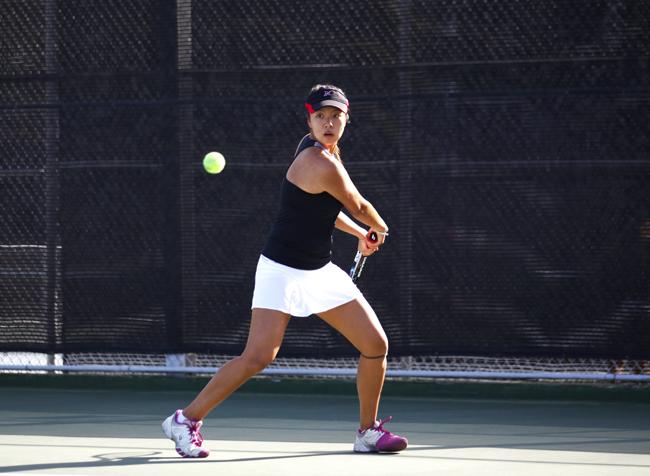 A quartet of Matador debuts helped open the 2014 women’s tennis season in exciting fashion over the weekend as the Matadors (2-0) swept the Westmont Warriors (0-1) 7-0 Saturday, and edged out the Air Force Falcons (0-2) 4-3 Sunday at the Matador Tennis Complex.

Freshmen Mickey Hsu, Vivian Lin and Kristen Poei all had strong first outings, and junior transfer Criss Rodriguez made a noticeable impact on the Matador’s squad, as the four combined for a 10-1 record in both doubles and singles matches over the weekend.

Lin and Rodriguez had instant chemistry, pairing up for an 8-1 victory over Westmont’s No. 1 doubles team, followed by an 8-5 win over Air Force’s top doubles duo.

Head coach Gary Victor was pleased with the results versus a tough Air Force team.

“It was a hard-fought win; they’re a very spirited, tough team,” Victor said. “They came to our fall tournament and actually outplayed us when it was an individual tournament. We knew that this was going to be a tough match.”

Saturday’s sweep of the Warriors proved to be an important match, with victories serving as the perfect entrance for the standout newcomers.

“We had three of our players who had never played a dual match before,” Victor said.  “It was kind of a dress rehearsal for today and every other match coming up.”

The Matadors were dominant on Saturday, as Hsu and Poei did not lose a single game in their first collegiate tennis matches. Rodriguez made her CSUN debut after a two-year career at Santa Monica College, defeating No. 1 Westmont singles sophomore Haley Strandness 6-0, 6-1.

Victor recognized Rodriguez as the biggest difference maker for the Matadors in the opening weekend.

“She’s someone who’s that kind of tough, stick-with-it kind of girl,” Victor said. “She’s also just a fantastic teammate– the girls love her.”

The Falcons kept Cal State Northridge on its toes, winning three of the final four singles matches of the day to keep the Matadors’ 4-3 lead in jeopardy.

Senior Lorraine Cheung and sophomore Jessica Warren were both defeated in three sets, and Poei was defeated in two very close sets, 7-5, 7-6.

Lin would provide the most dramatic match of the day as she battled No. 1 Air Force singles junior Tiffany Tran.  Lin would drop the first set 6-1, but showed remarkable composure and rallied back, winning the next two sets 6-4 and 7-6 to secure a hard-fought victory.

Victor felt that overall, his team showed an improvement not only with their play on the court but with their composure as well.

“We’re much more mentally tough than we were a few months ago, and I think that’s what we’re going to keep pushing for…to fight through the suffering of a match,” Victor said.

Although only two matches into the season, CSUN boasts the only undefeated record in the Big West Conference.  The Matadors look to extend their conference lead on Saturday when they host the Cal Poly Mustangs at the Matador Tennis Complex.