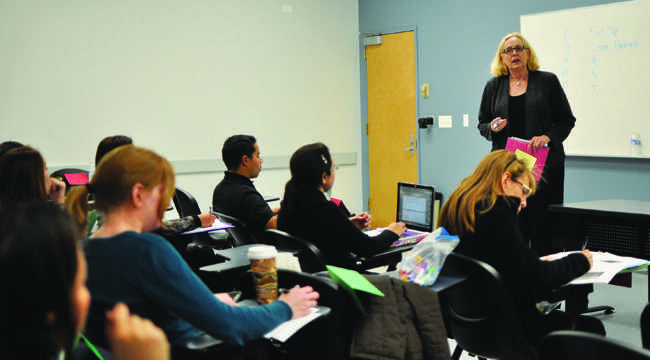 The Michael D. Eisner College of Education has organized workshops for current educators and has started to introduce future teachers coming out of CSUN to California’s Common Core State Standards (CCSS).

Adopted in August of 2010,the standards are intended to better prepare children for college and the workplace and require a reworking of the K-12 curriculum.

“We are very concerned about preparing ourselves, as well as our future teachers,” said Beverly Cabello, associate dean of the college.

Coordinated by the Council of Chief State School Officers and the National Governors Association Center for Best Practices, the standards set more rigorous guidelines in English, history, social studies, science and mathematics, according to CCSS documentation.

“This is going to change what teachers do in the classroom,” said elementary education professor Nancy O’Rode.

“When you look at the common core standards, one of the things that jumps out is that the focus is on teaching kids how to think critically and how to do problem solving,” Cabello said.

The common core standards aim to have students provide evidence for their conclusions as well as constructively criticize others.

With CCSS there will be a change from a teacher demonstrating how to do a problem with a textbook, and then having students mirroring the problem, into a discussion based method, O’Rode said.

In order to assess the results of CCSS instruction, the Smarter Balanced Assessment System (SBAS) will be implemented and will differ from the multiple-choice format of the Standardized Testing and Reporting, according to O’Rode.

“You’re going to have children use a keypad and use a mouse to punch in the correct answer for a math problem, and then explain why they think that is the correct answer,” O’Rode said. “That’s totally different than picking one out of four questions.”

Scheduled for a trial run this spring, SBAS will assess children in grades three through eight and eleven, in English and Math.

Cabello said the results will act as a diagnostic that details a student’s thought process and allow a teacher to “have a more detailed understanding of the child’s knowledge.”

In order to prepare educators for these new testing standards, O’Rode has coordinated workshops in SBAS.

Working with educational organizations that specialize in specific subjects, CSUN education professors have provided assistance to teachers throughout California in their specific subject matter.

“When you have big changes such as these, there should be a lot of support for teachers in the field and the administrators as well,” Cabello said.

Kathleen Rowlands, associate professor of secondary education and director of the CSUN Writing Project, has been working with schools to help them understand the literacy requirements of the CCSS. Rowlands has been involved in scheduling multiple sessions with schools to address and assist with their concerns about the standards.

“What we do is talk to the principles and teacher leaders about what they want to focus on,” said Rowlands.

Having guided schools in Watts, Calif. and as far north as Arvin, Calif., Rowlands said revisits are required and people need time to process the CCSS.

Within the elementary and secondary subject departments at CSUN’s college of education, professors have begun to implement the standards into their courses.

“It’s going to take quite a bit of preparation to do a good job in providing instruction,” Cabello said. “They need to know for example, what are the best strategies for teaching problem solving in math, or in science, or in social studies, or in literature.”

O’Rode said students within the elementary multiple-subject program at CSUN are aware of the changes, and have noticed the differences from what they learned in high school and what they are being taught at CSUN.

“[Students] want to be up to date,” O’Rode said. “They are interested in the changes.”

Aside from the guidelines, CCSS does not offer a teaching method and no course materials or books have been developed for the standards. It is currently up to educators to develop their own method for instructing in accordance with CCSS.

Rebecca Mieliwocki, seventh-grade English teacher and CSUN alumna, said the standards will not be a huge shift for her.

“I have always been the kind of teacher to assign projects and activities that required students to think creatively, critically and that forced them to problem solve alone, in pairs or groups,” Mieliwocki said in an email.

Mieliwocki said that the standards are good for California’s schools because they emphasize necessary 21st-century skills.

“It’s not enough for kids to be able to memorize and regurgitate facts,” said Mieliwocki, who won the 2012 Teacher of the Year award. “But now, across all disciplines, creative problem solving in real-world scenarios is required.”

The standards have been adopted by 45 states including four United States territories and the District of Columbia, and are intended to provide a national common curriculum that makes students competitive on an international scale, according to the CCSS website.

“It’s time that the bar was raised to an appropriately challenging level for all kids in the United States and CCSS does that,” Mieliwocki said.

In 2013, a total of $1.25 billion was provided to K-12 schools by the California Department of Education in two apportionments, and was distributed based on enrollment.

It will take several years before CCSS is fully incorporated into the education system, according to the department.

“We see the common core standards as a good place to go, a good direction to take,” Cabello said. “On the other hand, we all realize how much work [it will take] in terms of preparing ourselves as well as our future teachers.”