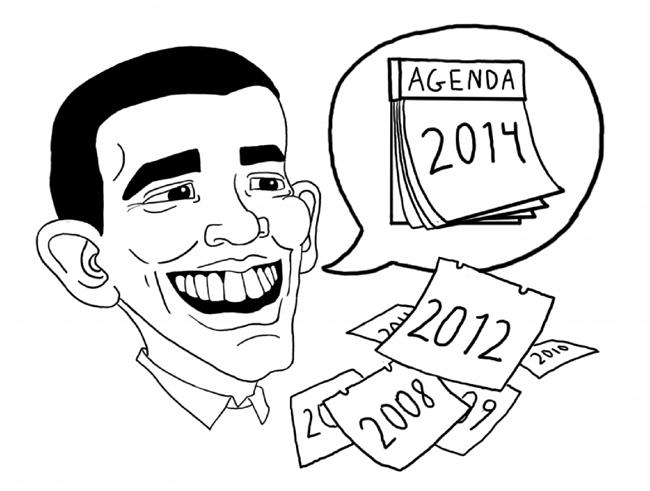 As usual, Obama began his sixth State of the Union address with a bunch of uplifting and tear-jerking stories that will eventually connect to his main points in his speech.

But like any major political event, we, the American public, can catch a glimpse of what the world of politics is all about: fake smiling faces and shaking hands, grand speeches accompanied with words the common people cannot understand, and news outlets present to report on a public relations announcement.  And let’s not forget the biggest issue with political speeches: the ambiguity (hence the fancy words) and the lack of details that accompany the subject matter they are covering.

That said, I must applaud Obama for the ballsy move to use executive actions toward raising the minimum wage for federal contractors to $10.10. He called 2014 the “year of action,” and with this, he has set a tone.

While many people are going to say that Obama overstepped his boundaries, he has my respect for using such an extreme measure to do something good for the people who put him in office. I hope this isn’t just a one-time act of power and that Obama will continue this theme by doing whatever is necessary to push his agenda.

As Obama has said: He will act on his own and slash legislation for progress to be made.

Without further ado, let’s break down what Obama spoke about in his grand speech and what his goals for the “year of action” will be:

After announcing the various accomplishments that his administration and the government have achieved, Obama brings the obvious out to his affluent audience: the large income inequality gap in America. Obama recognizes that income inequality has widened, that the minimum wage has not budged at all and that too many people are working too many hours but are still in poverty.

It is quite apparent, especially with the occupy movements, that Americans are realizing that there is a huge income gap between the rich and the poor.

The rich are getting richer off a reblooming housing market and surging stock markets. All the while minimum wage remains stagnant, students swim in debt and jobs are still hard to find.

Obama is open to working with non-federal workers to raise the minimum wage for the rest of America’s workers. Maybe there’s a sliver of hope in the face of this economic disparity.

Obama is calling for action to invest in smaller businesses that will put Americans to work and to bring outsourced jobs back to America.

My concern with this is how will investing in smaller businesses and insourcing jobs work out? It’s become an unfortunate trend for Obama’s agenda to be stalled by Congress.

The environmental issue is Obama’s next big concern. Obama parades his program “All of the Above”, stating that America has reduced its carbon emissions more than any other country in the world. He aims to wean us off our dependency on foreign oil.

However, why is our interest still vested in the Middle East, especially since we are barely coming to an end to the war in Afghanistan?

There is an obvious political motivation behind training armed Afghan forces and making Afghanistan our ally. Obama declared that a small number of US troops will remain in Afghanistan. That means leaving behind an American influence in the form of a military base as a reminder to the Middle East that America is watching.

Obama then spoke on immigration, a hot topic for the past several months. It is quite upsetting that Obama choose to spend about a minute on the topic, simply stating that the system is broken and we need to reform immigration this year while refusing to elaborate.

And that was the end. For months, pro-immigrant groups have been hounding Obama for a clear answer on his stance on immigration. And his State of the Union speech offers no answers. What are you going to do about the 11.7 million undocumented immigrants in America?

This will be the year of action, and I expect that Obama will provide a fair and transparent path to citizenship for the people who came to America for opportunities. Just as he paraded around giving opportunities to Americans, I do hope this includes giving a fair and equal opportunity to the immigrants who came here for a better life.

Solving the student debt problem doesn’t start with pre-k education, but with making sure that higher education costs are not going out of control.

I remember all the hopes and dreams that Obama’s campaign brought to people of color. Obama spoke of progress and of change six years ago. Presently, most of the problems that Obama intended to tackle back then still exist now. Obama, for the sake of the people, keep to your word and take the necessary steps to expand on American opportunities without the chain of legislation.