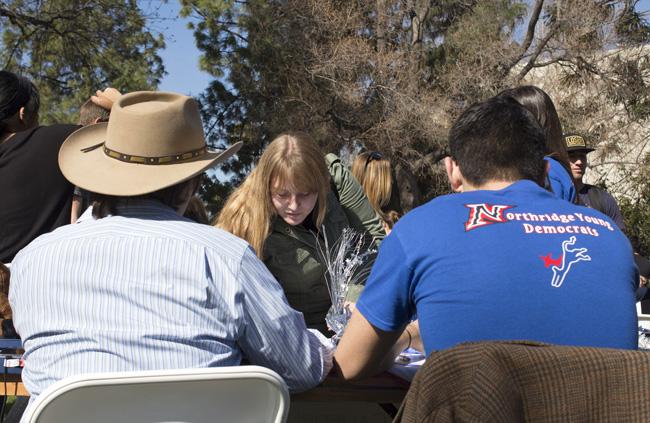 Meet the Clubs had around 200 tables with members of CSUN’s fraternities, sororities, professional organizations, sports clubs and other  clubs at each table yesterday.

“A lot of people think nothing is going on (at CSUN),” said Adrian Smith, junior religious studies major. “I think (Meet The Clubs) is good because the event reaches a lot of freshmen, as more of them come out in the spring.”

Smith said the event helps students find the right community to join because they can see a variety of groups at once.

“This is my last opportunity to see something that catches my interest and stick with it,” said Monika Chamichyan, senior psychology major.

Chamichyan said it can be hard finding a club to join at CSUN, but meet the clubs makes it easier to find one. She also said the event made it less uncomfortable to approach the many different clubs.

Students made their way through aisles of tables as club members mingled and attempted to persuade students to join their clubs. There were two to four members at each table passing out fliers and providing information.

“Everyone is informative and attention grabbing,” Haywood said.

Organizations showcase their trophies, plaques, pictures and crafts, which cluttered the tables of sororities and fraternities. Students could ask any questions they had for members of the clubs.

Jorge Lopez, senior psychology major, said the event is exciting because there are a variety of organizations and different benefits to each.

“Someone is going to find that home,” Lopez said.

Lopez thinks some people will join a social organization and have a good time.

“This is a day people will remember the rest of their lives.” Lopez said. “This is the day that started it all.”

The close quarters made it difficult for students to walk through the aisles of tables without bumping into each other. The limited space highlighted some clubs, while other clubs were hard to see.

“Everything is jumbled up, there needs to be more room, more space,” said Eric Diaz, junior mechanical engineering major.

Some clubs were fortunate to have their table covered in the shade, while others had to endure the sun.

Mayte Moreno, sophomore undeclared major, said the event was fun, but would have liked more shade, some snacks and water.

Jesyka Dunn, freshman undecided major, said it was not intimidating to talk to the people at the tables, but that the event should be bigger next semester.

Some clubs tried to stand out with flags and easy-ups displaying their organization logo or colors. The Young Democrats of CSUN had a five-foot blow-up shaped like a donkey colored in red, white, and blue.

Sigma Nu Fraternity tried to set itself apart by featuring the fraternity puppy.

Other clubs got interactive with students. The Rugby Club was seen tossing a rugby ball around. Other sports clubs had props and equipment on display.

Israel Sanchez, freshman graphic design major, said she hopes to join a club this semester since she has more time. She also had other reasons to join a club. “To be more social, make new friends, and get the most of the college experience.” Sanchez said. The event will continue today on Bayramian Lawn from 11 a.m. to 2 p.m.