Around the world in a winter break: Matadors explore, volunteer, and vacation 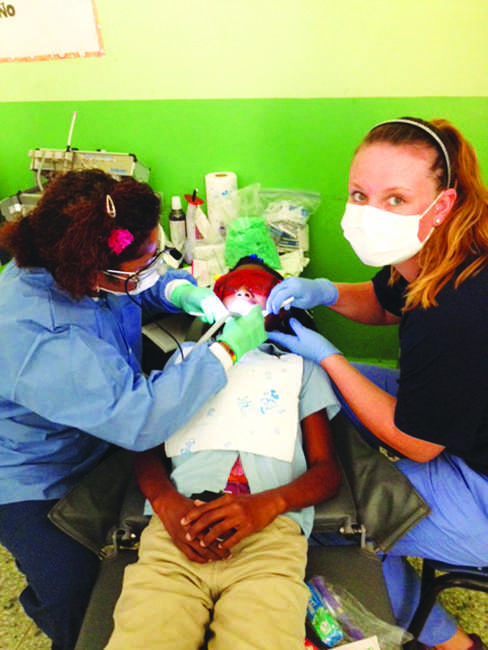 When the last bells ring on the fall semester, Matadors aren’t the type to spend their down time sleeping in late and watching Netflix. Whether nursing the wounds of finals or celebrating the successes of another semester passed, CSUN students and alumni are the type to jump from waterfalls, volunteer abroad or scuba dive the Great Barrier Reef.

There is no better way to enjoy time off from a busy school schedule than to get out of town over winter break. Students use this perfect time to experience new places and make memories.

Daniel Jonte, senior and business marketing major, spent his time off exploring the islands of Hawaii with family. As soon as the New Year’s ball dropped, he was on a flight at 9 a.m. to start 2014 off, island style. Over the next two weeks Jonte along with his GoPro camera captured everything the islands had to offer.

“I spent one week on the big island and another on Oahu. It was the experience of a lifetime,” Jonte said. “This was my second trip there and first as an adult. I was able to explore the island with family and also experience it from a local point of view.”

During the first week, Jonte stayed in Kona on the west side, spending his time waking up early and catching as many sights as possible. He visited Hilo, the county seat and largest settlement on the island, and ended up getting in a helicopter for a bird’s eye view.

Jonte said it was his goal to see everything. The chopper ride soared over Mauna Loa Volcano where he looked down at live hot lava flow and macadamia nut farms. On the ground he visited Punalu’u, the famous black sand beaches where he was able to snorkel with protected green sea turtles, known locally as Honu.

The second week started with a short trip to Waikiki where he continued his mission to see everything. One of his best days was spent renting mopeds and beach hopping west to Hanauma Bay and then to Kailua beach, which he called one of the top beaches in the world.

“The craziest and most memorable thing had to have been cliff jumping,” Jonte said. It was a muddy two or three mile hike up to the Maunawili Falls where a large pool was surrounded by huge cliffs and three jumping stations.

“One of the local guys brought me up to the highest jump. It was nuts. There were signs saying, ‘Don’t jump!’ The takeoff point was a little slab of rock that, as you stood, didn’t jut out further than the arch of your foot,” Jonte said. “You had to hold on to a rope tied to a tree behind you and lean out. I was already up there and I thought to myself, now I have to. I’m already here.”

Gilbert graduated from CSUN in 2011 with a degree in Public Health Education and is now working towards a Masters of Science in Nursing from University of San Diego.

“While at CSUN for my senior internship, I worked at Northridge hospital and participated in community outreach. I think that is what sparked my love for working with the public,” Gilbert said. “I hope my little part could make a real difference in someone’s life.”

She volunteered through USD in the rural Dominican Republic city of El Cercado. El Cercado is located four hours west of the capital city, Santo Domingo, and not very far from the Haitian border. Its poverty, lack of infrastructure and isolation make health care very limited, according to Gilbert.

The program works together with a small church-based kindergarten through ninth grade school of around 330 students called Saint Francisco Javier Fe y Algria. The group’s purpose is to aid and research the community through examinations and health care screenings over the course of two weeks split into two shifts. Laura was part of the second shift, arriving on Jan. 9 and staying until Jan. 19.

“It was difficult sometimes because there was a huge language barrier. My duties included oral hygiene education, dental as well as physical exams,” Gilbert said. “We did home visits and surveyed family health needs in order to understand how to improve overall health in the region.”

Student volunteers are required to pay their own way on the trip, Gilbert said. They are housed in guarded barracks with bunk beds about a mile and a half from the school and they walk to work in the mornings. During the week, volunteers spend their days working with the community and nights collecting data and recording findings. The city lights went out each night between 7 p.m. and 11 p.m. for power conservation.

The purpose of the trip was the volunteer work but during the weekend, volunteers were able to go to the capitol and enjoy some sights. She said the most fun thing outside of work was visiting Boca Chica Beach and swimming in the warm ocean water.

“The most memorable thing that happened for me had to have been the dental education,” Gilbert said. “We gave the children packets with toothbrushes and dental floss. Products they had never even seen. It was cool to see the children’s reactions. As I walked home one night, there had to have been four or five young boys strutting around with the toothbrushes in their mouths, proud to be learning how to take of their health. It made me feel like we really were having an impact on these kids.”

Gilbert will be graduating in May and hopes to be working in a hospital emergency department as well as continuing to do international aid trips whenever she can.

Whether travel was for work or play, winter break saw Matadors all over the globe. Ryan Sikorsky, a sophomore economics major, along with his sister and mother traveled the most miles with a 14-hour flight to Cairns, Australia.

The trip was supposed to begin on Jan. 5 but due to the massive storms on the east coast earlier this month, his first flight was cancelled. They arrived after catching a new flight the next day and immediately jumped into their vacation.

“We literally landed 16 hours before scuba diving the Great Barrier Reef,” Sikorsky said. “It was unbelievable. We went to two different spots. The first was shallow crystal clear water surrounded by fish and coral you could see everything. We were even able to see a giant sea turtle.”

The second spot was much deeper. Several miles out to sea in the middle of the ocean, the instructors took them 40 feet deep, almost all the way to the bottom. Sikorsky vividly remembers looking up at a beautiful three-story wall of coral.

“While down there we saw two sharks off in the distance. The water that deep was murky, so you only saw them for a split second,” Sikorsky said. “It was pretty intense—that rush of adrenaline being that far down in the water—in their element.”

Sikorsky originally went to Cairns for its well-known nightlife. Scuba diving during the day was followed up by amazing restaurants and bar tours. Sikorsky talked about how going out at night was so much fun because the night crowd was made up of very cool locals and other Americans.

From Cairns, they traveled inland by train to the mountains and a small aboriginal town called Kuranda. The landscape was full of beautiful waterfalls and lakes leading into the rainforest, Sikorsky explained.

“That was where we were able to hold koalas and feed wallabies and kangaroos,” Sikorsky said, laughing. “Koalas are not as soft as you think they are.”

On the way back to town they took the sky rail, a glass gondola that runs 70 or 80 feet above the rainforest.

“You could see for miles, even straight down, it was unbelievable,” Sikorsky said.

From there they rented a car and drove seven hours to the famed Airlie beach.

They stayed in a hotel atop a hill looking down on the rocky dry coral beach. He remembers the sound of live music everywhere they went. Apparently the didgeridoo is very hard to play. At one point he and his sister attempted to explore on their own. They found a nearby trail and started walking.

“We tried to go on a hike,” Sikorsky said. “Two minutes in, my sister and I saw a web sprawled across the path and a spider as big as my hand. We looked at each other and decided, ‘Nope. Not doing it.’”

One of the biggest highlights of Sikorsky’s trip was renting jet skis with his sister Kristen, also a CSUN alumna, near Daydream Island in the Whitsunday Islands of Queensland. He said they rode out as far as they could into the open ocean because the jet ski rental was only for half an hour.

The rest of the trip he spent in Sydney taking in the sights such as the popular Bondi and Manly beaches, Darling Harbor, the Australian Maritime Museum and, of course, the Sydney Opera House.

“It was really awesome to go with family. We had a blast. We got up at dawn every day and by the time it was over I was more tired than I would have been during finals,” Sikorsky said, looking back. “Being able to see the Opera House flying out of Sydney was an amazing thing. You have the wind at your back on the way home and flight is about an hour shorter. I was ready to get back to CSUN.”

Matadors are on the go every time they get the chance, whether it is exploring the thrill of the pacific islands, giving back to those less fortunate than you, or finding out the truth about koalas. CSUN students made the most of winter break. What will you be doing the next time the last bells ring to end finals?