CSU Board of Trustees to prioritize grad rates, work-study programs

California State University (CSU) Chancellor Timothy White urged members to make it their priority to improve education at his first State of the CSU address on Wednesday at the Board of Trustees meeting.

“We should be proud that the CSU helps young people become leaders,” White said. He said the university system is a national exemplar of higher education.

One of the top changes that the board plans to push is to increase graduation rates.

“We need 1 million more graduates by 2025 to enrich our economy,” said White.

The current CSU graduation rate is 53 percent, according to the Committee of Institutional Advancement. However, the graduation gap has remained at 11 percent.

The goal is to cut the gap percentage in half, pushing the graduation rate to the desired goal of 54 percent.

However, this number is unsatisfactory for some campus presidents and provosts.

“Graduation rates at CSUN have gone up 10 percent, but my ideal rate is 80 percent,” said CSUN President Dianne Harrison. She presented views to the board that the majority of campus presidents shared.

“We need to have higher aspirations for students,” said Harrison.

Rates are heavily linked to college preparation provided at the high school and middle school levels, according to the CTI study.

“We’re trying to place a band-aid on our schools… we need to change our K through 12 system,” said Trustee Steven Stepanek.

Carol Shubin, CSUN mathematics professor, presented a plan to allow CSU students to engage in work-study that will allow them to contribute to their community. In order to encourage college readiness K through 12 students would be of special interest.

“Our students are playing catch up, and unfortunately, we think that’s just the way things are,”  Shubin said

Although work-study is readily available to all CSU campuses, and all universities in the country, via the Higher Education Act of 1965, Shubin believes that the available funds aren’t enough.

The legislation states that the amount of funds directed to each campus is dependent on their tuition fees.

CSUN data states that $1.3 million have been disbursed from the federal government to support this.

“My son goes to Columbia University and he’s able to coach a football team in the Bronx… When will a CSUN student get a good pay to do that?” she said.

Changing the restrictions of the Higher Education Act is on Shubin’s agenda, but more importantly, she cares about the change that students are able to create when they engage in their community.

“In order for our students to do this, they need to be motivated,” said Shubin.

Like Shubin, White said that the CSU’s purpose was to help the not only the universities, but community as a whole.

“We care about the impact that we make in the lives of our students, but that is only a ripple,” he said.

In order to make this plausible, several cities have pursued an engagement in not only CSUs, but also with the school districts and city colleges.

A college promise program was presented to the Board, which has been created and tested out in a few cities, including Long Beach and San Francisco, in which institutions strive for all youth to receive a higher education.

Other attendees were allowed to voice their concerns within the CSU system.

Tammi Rossman-Benjamin is a professor at UC Santa Cruz and co-founder of the AMCHA Initiative, a group that protects the rights of Jewish students.

She addressed the board with a concern about CSUN professor David Klein.

“We believe that Klein is violating laws,” said Rossman-Benjamin, whose organization is accusing Klein of using the CSUN website to direct the community to his website which they believe is anti-semetic.

“We wrote a letter to the (state) attorney general to get her involved,” she said.

A previous Daily Sundial article said that California Attorney General Kamala Harris, found Klein’s webpage did not violate any of the CSU codes of conduct.

Likewise, representatives from Students for Justice in Palestine made public comments in support of the free speech protection within the university system.

According to these individuals, it is the right of the CSU system, being one of the largest in the world, to protect this freedom.

“[Education] is our future. It is the future and it will become our legacy,” said White.

The next Board of Trustees meeting will take place on March 25. 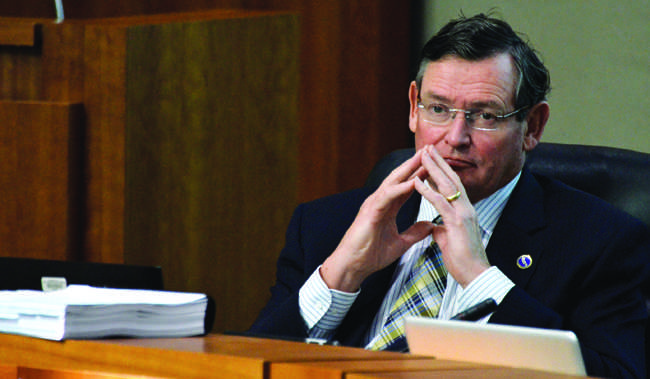 CSU chancellor Timothy White listens to a presentation at the CSU board of trustees meeting.