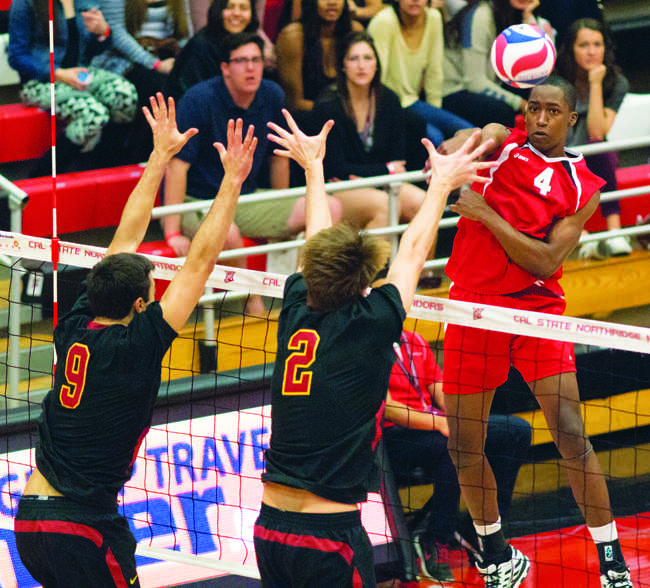 Following a strong showing during their most recent homestand, the Matadors (2-3, 2-2 MPSF) will head into the bulk of their tough schedule with a renewed certainty.

CSUN will be entering the Alex B. Spanos Center in Stockton on Friday to face the Pacific Tigers (1-6, 0-4 MPSF) on somewhat of a hot streak, despite losing last Wednesday at the Matadome.

“We’re playing the highest level of volleyball we’ve played in maybe four years right now,” Campbell said. “It doesn’t mean we can’t lose, it just means we had a great week and we need to try and maintain that.”

Lenore added that a new offensive set has helped changed the Matadors’ season following their successful homestand, as the team used a “pipe” set in the victory over USC.

“We’ve been working on it in practice a lot these past three practices, its starting to become more effective,” Lenore said. “We have more areas where we’re hitting from, it’s definitely alot harder for the defense.”

On Wednesday, the Matadors challenged the Pepperdine Waves after looking sluggish in the first set.

Pepperdine senior outside hitter Kyle Gerrans, who contributed 15 kills to the Waves’ victory, dominated the first set as the Matadors trailed by as much as ten, losing the set 25-15.

The Matadors made an intense comeback, winning the next two sets to take a 2-1 lead for the match.

Lenore led the team with 18 kills in the first three sets on a .382 hitting percentage to keep his team on pace with the nation’s top team.

“They were killing the ball (and) I just had to go with whoever was hitting well,” Magorien said. “The coaches showed me the stats on Sam Holt, the outside, and Damani, the opposite, and said they were hitting really well and to keep going with them.”

Lenore was gracious of Magorien’s effort.

“Since I was out the first set, (Magorien) just tried to get me warmed up,” Lenore said. “I guess I was just doing more from the beginning so he kept setting me more. I don’t really often get to hit. It was actually really fun at this game.”

Gerrans and junior outside hitter Josh Taylor smashed a string of kills to pull away from a 13-13 tie to lead 16-14.  However, CSUN continued to play Pepperdine close, and a kill from sophomore middle blocker Vaughn Wellenreiter tied the set at 23-23, putting the Matadors in position to win the set.  After the Matadors struggled to score two straight points, two consecutive Pepperdine errors in extra points gave CSUN the win 29-27 to tie the matchup at 1-1.

The third set proved to be just as exciting with 20 ties as the teams exchanged points from beginning to end.  Northridge would pull away in another nail-biting set, winning 27-25 on a kill by Wellenreiter.

Pepperdine picked up the offense, hitting .444 in the fourth set and looking sharper as they won 25-19 to tie the match at two sets apiece.

The fifth match began in the Matadors’ favor as they took a 6-4 lead, punctuated by a kill by Holt.  However, CSUN gave up the match with four straight errors following an 11-11 tie and lose the upset bid, 15-12.

Any emotion following the tough loss was quickly shaken off as CSUN opened strong against the Trojans on Friday.  CSUN took an early 5-2 lead in the first set punctuated by a spike from junior middle blocker Greg Faulkner and an ace by redshirt freshman libero Bradley Sakaida.

CSUN played exceptionally well on defense, limiting the Trojans to a .138 hitting percentage in a 25-19 victory to a take a surprising 1-0 lead over the No. 4 team.

The Matadors continued to play consistently in the following two sets, as there was only one lead change.

The Trojans made a slight comeback in the second set, trailing by a point for most of the set. However, the Matadors solidified their lead as the Trojans committed three straight errors to trail 20-16.

CSUN led at 23-19 following Lenore’s seventh kill of the set and a block from Wellenreiter, who rejected three kills in the match .

The Matadors started the third set leading 5-4 with a tip dunked from Magorien and an ace from Magorien, who finished with a team-high 25 assists.

The Trojans kept close throughout the whole set, trailing by two points for most of the set.  However, a surprise back-row kill by Holt pushed CSUN ahead by four, 21-17.  The Trojans fittingly committed three errors to lose the set and the match, 25-21.

“Obviously we feel better about things than we did two or three weeks ago since we’re playing so well,” Campbell said. “We don’t stress winning or losing, we stress the process.  The process usually takes care of the result, and we played well on Wednesday. We did the same thing on Friday, and we feel good about winning at USC.”

Despite the high of Friday’s victory, Campbell had some concerns.  Redshirt freshman opposite hitter Jakub Ciesla, third on the team with 33 kills on the season, is injured and may not be available for the weekend matches.

Despite the absence of his productive teammate, Lenore was excited for the rematch with the Tigers, who defeated the Matadors on Jan. 4.

“We weren’t really on (that game) so we’re ready to come and show them what we’re really made of,” Lenore said.