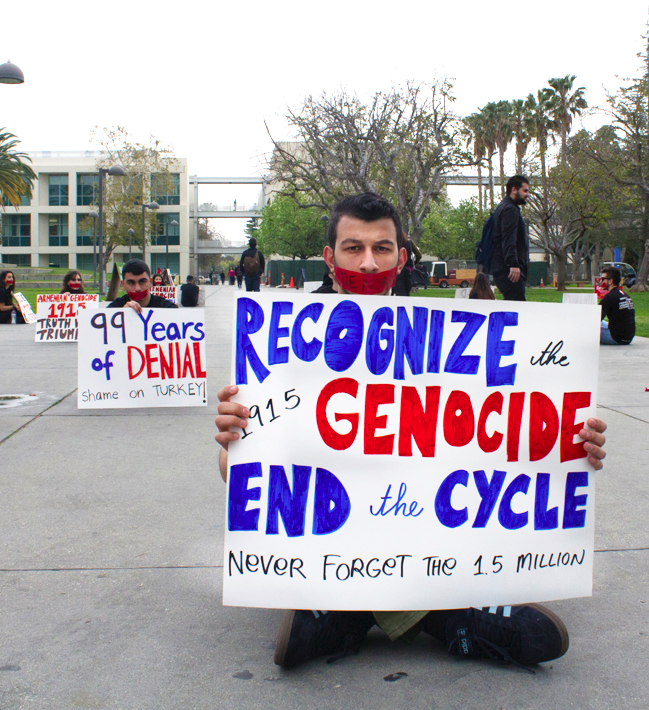 Students of the CSUN Armenian Student Association (ASA) organized a silent protest in front of the Oviatt Library on Thursday.

Throughout the California State Universities, members of ASA protested to bring awareness to the Armenian Genocide of 1915, when the Turkish government sought to deport and massacre the Armenians living in the Ottoman Empire.

Presently, the Turkish government does not acknowledge these events. Despite pressure from Armenians and social justice advocates throughout the world, it is still illegal in Turkey to talk about what happened to Armenians during this era.

Alina Sarkissian, president of the ASA, said, “We are always fighting for Justice.”

The annual protest, called the “Stain of Denial,” started three years ago.

Alpha Gamma Alpha and Alpha Epsilon Omega also participated in the organization of the protest.

Students of all ethnicities were sitting on Matador Walk holding posters saying “End the Cycle” and “99 years of Denial”. All participants had their mouths duct taped.

Hovannes Stepanian, senior, participated in the protest to bring attention to the genocide.

“We want people to think and start questioning,” he said. “It’s best if we know the truth.”

Presently, the Turkish government, along with the United States, does not acknowledge these events.

Syria is the most recent country to recognize the Genocide, bringing the total to 22.

Hakop Oganasyan, president of Alpha Epsilon Omega explained said the gag rule in Turkey is not bringing awareness to the genocide.

“We want recognition of not just the Armenian Genocide but of all genocides past and present,” Oganasyan said.

Gustavo Patino, a sophomore who passed by the protest said, “There was something that happened in history that many Armenians suffered from and if there are laws that prevent any human speech, their natural born rights, the people should be able to abolish the government.”