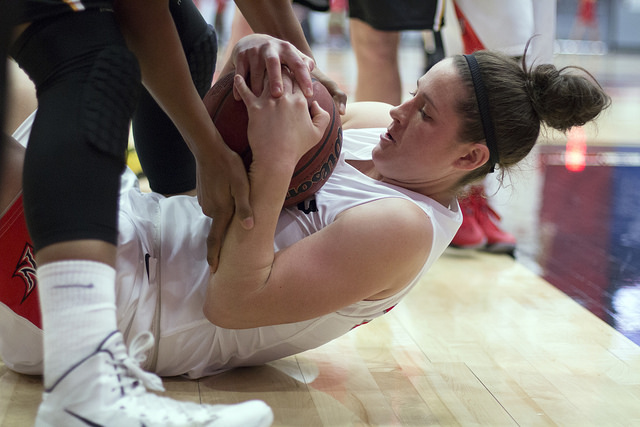 CSUN was led by junior guard Cinnamon Lister who had 23 points while sophomore center Bernadette Fong provided aggressive play off the bench. Fong recorded a double-double, finishing with 14 points and 11 rebounds.

Solid defensive play kept CSUN ahead most of the game as it held the Highlanders’ shooting percentage under 30 percent. The Matadors also were successful in containing freshman guard Brittany Crain, who leads UC Riverside in scoring averaging 18.5 points per game, to just nine points.

The Highlanders got off to a quick start leading the Matadors by 4 points, but that would be their largest lead in the game. Cal State Northridge slowly took control hitting their jump shots and knocking down layups. Fong entered the game early making her presence felt as she connected on a jump shot and knocked down a layup that would give CSUN a one point lead at 12-11 with 13:15 minutes left in the first half.

UC Riverside would take the lead with sophomore guard Annelise Ito hitting a layup to put her team up 18-17 with 9:25 remaining in the half. However, Fong continued to play well coming off the bench, making a layup that would give the Matadors an eight point lead heading into halftime with the score at 37-29.

Both teams did a great job taking care of the ball. The Matadors would only have three turnovers while the Highlanders just had two at the end of the first half.

Despite some early foul trouble with junior guard Ashlee Guay picking up her third foul in the second half, CSUN was able to play aggressive and maintain their lead. Fong would fight inside for offensive rebounds and knock down a layup to keep the Matadors ahead 45-38 with 13:29 to go in the second half.

Guay would have the hot hand in the second half where she would hit a three pointer to put her past the 1,000 point mark in her career, telling Go Matadors that she was proud of the team win, but focused on the next game.

“Our mindset is the next game in store, which is Saturday vs. Hawai’i,” Guay said.

Guay would hit all but two of her points in the second half, finishing the game with 13 points.

The Highlanders would go on a 6-0 run, fighting to stay in the game midway through the half. After exchanging buckets, Lister would drain a huge three off an assist from sophomore guard Breeyon Alexander to push CSUN ahead 64-52 with 3:04 left in the game.

After a trip to the charity stripe, where junior guard Janae Sharpe would hit a pair of free throws with 34 seconds left to put the Matadors up 69-59, CSUN would go on to finish the game on top 71-61.

The Matadors will be hosting the Hawai’i Rainbow Wahine (10-8, 4-2) on Saturday and look to extend their streak to three straight conference wins. Hawai’i is currently third in the conference and is coming off a loss to the Long Beach State 49ers.