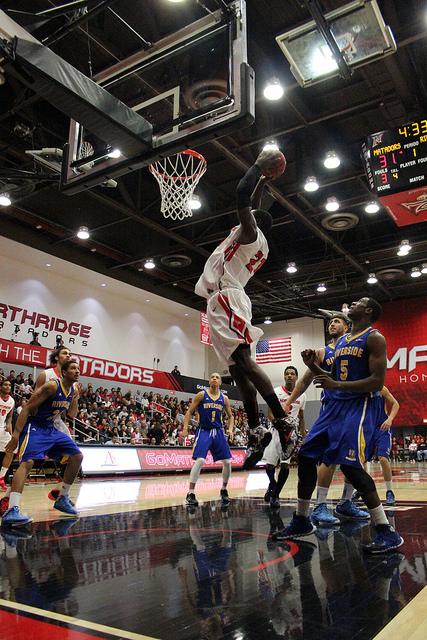 The Matadors (11-11, 3-4 Big West) outlasted a three-point barrage during an 93-89 overtime victory against the UC Riverside Highlanders (7-14, 2-5 Big West) in Thursday night’s nail-biting, Big West conference showdown at the Matadome.

Junior forward Stephen Maxwell lead CSUN with 24 points and 13 rebounds, his eleventh triple-double this season. Maxwell impressed a full Matadome by stuffing the stat sheet with an additional 3 assists, 3 steals, and 1 blocked shot recorded in the Matadors hard-fought overtime win.

After starting conference play 2-0, Cal State Northridge was looking to end a four game slide against conference opponents. UC Riverside entered the game having 11 of their 20 games this season decided by five points or less.

Both teams entered with a 2-4 record in conference play this season. Heading into the game, The Matadors were seventh place in the Big West, one place above the Highlanders at number eight.

UC Riverside forward Taylor Johns ended the first half with an impressive dunk giving the Highlanders a six point lead at the halfway mark, 49-43. Johns would finish the game with 16 points and 6 rebounds, including critical baskets inside the paint for the Highlanders.

Down 49-43, CSUN allowed UC Riverside to shoot 72% from the field in a first half offensive showcase. The Highlanders boasted a 63% shooting from 3-point range with seven 3-pointers on just 11 attempts in the first half.

Sophomore guard Landon Drew led the Matadors in scoring at the half with 11 points. Drew shot three of four from 3-point range, as CSUN shot an impressive 66.7 % on nine first half 3-point attempts.

The Matadors came out of the half with more energy on both-sides of the court. However CSUN was down nine points at 68-59 with 9:10 remaining in regulation. The Matadors would go on a 7-0 run that cut the lead to two at 68-66.

With five minutes remaining, consecutive shots from downtown from the Matadors gave them a 72-71 lead.

Johns converted a single free throw for UC Riverside with 28 seconds left  to bring their deficit to two at 80-78 . CSUN turned the ball over on the ensuing inbounds play, and UC Riverside  regained possession.

After a timeout, UC Riverside freshman guard Sam Finley added two of his career-high 27 points with an easy drive and lay-up with 16.1 seconds remaining to tie the game at 80 apiece.

The Matadors attempted to win the game on a mid-range pull-up jumper from junior guard Ben Vozzola. A Highlander defender blocked the shot and sent the game to overtime.

The Highlanders controlled the overtime tip-off, and converted the first points of the overtime with a Johns lay-up resulting in a 82-80 lead for UC Riverside.

The lead changed hands several times, before UC Riverside senior forward Chris Patton was sent to the free throw line down 91-89 with 47 seconds remaining. Patton missed both but the Matadors knocked the rebound out of bounds, and the Highlanders regained possession.

With 15.6 seconds remaining, Finley, the Highlanders’ game-high scorer, drove to the basket for a contested shot, but it bounced too hard off the iron.

CSUN rebounded and then pushed the ball to Maxwell for the game clinching dunk with two seconds remaining, making the final 89-93, Matadors.

Maxwell scored eight points in the final OT period. He said the game-clinching dunk, with two seconds remaining in overtime, gave the hard-fought game an exciting ending it deserved.

“[The dunk] was an absolute adrenaline rush,” Maxwell said after the game.

The Matadors did not miss a shot in overtime. The team shot 4-4 from the field in overtime, including a 3-pointer. CSUN finished the game with a 50% shooting percentage over the entire contest.

“Fans have supported us a long time,” Maxwell said about playing in front of a crowded Matadome. “We wanted to give them a win they deserved.”

Junior guard/forward Stephan Hicks chipped in 13 points for the game, but contributed to an improved defensive effort in the second half. He accepted the challenge of guarding Finley and was key for critical Matador stops despite allowing Finley to have a career game in 35 minutes off of the bench.

After the game, Hicks said he wants to continue growing his overall basketball game by accepting the challenge on defense.

Defense was key for the Matadors as the game came down to the Highlanders final possession of overtime. Improved CSUN defense caused UCR to shoot 34.8% from the field and only 12.5% from 3-point range in the second half.

CSUN Head Coach Reggie Theus said Thursday’s victory is the kind of win the team needs to battle the difficulty of being in a four-game skid. He said his team showed character by battling back from being down nine in the second half.

“Our guys gutted it [the second half] out. Tonight we reached down and made plays down the stretch.” Coach Theus said.

Coach Theus said this is the fourth game the team has won on the opponent’s last possession, due to defense.  “We understand what has to happen in close games,” Coach Theus said.

The Matadors will continue their push in the Big West standings on the road in a match-up against the Hawai’i Rainbow Warriors (14-5, 3-2 Big West). Hawai’i is currently No. 3 in the conference and hosts CSUN Saturday at 9 p.m.