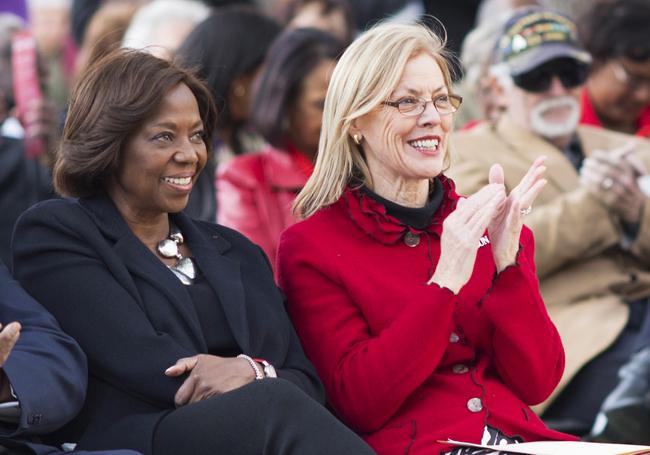 In the days after the devastation of the 1994 Northridge earthquake then-CSUN President Blenda Wilson made sure the campus remained open despite $400 million in damage.

Wilson was honored on Friday with the dedication of the Blenda J. Wilson courtyard, for her presidency at CSUN during the Northridge earthquake and for her assorted contributions to the educational system.

Under Wilson’s leadership, around 300 makeshift modular classrooms were brought in to allow students to continue attending classes and finish the spring semester.

After the 6.7 magnitude earthquake, the campus was able to re-open four weeks afterward.

Margaret Fieweger, former vice president of academic affairs, gave insight into Wilson’s character as a leader and how it gave strength to the CSUN community in the wake of the aftermath.

“I realized it was the person she was and her characteristics that got us through the crisis, the cataclysm, the thing that had never happened before in a university,” she said. It was President Wilson’s confidence, vision, and ability to take in vast pieces of information from different kinds of people, process it, and take action.”

Wilson was responsible for instituting several public service centers, including, the Center for Southern California Studies, community health initiatives, and the entertainment industry institute, according to current CSUN President Dianne Harrison. She created the presidential scholars program, reinstated the honors program, and insured that service learning was included in the curriculum and was an integral part of student life.

Currently, CSUN’s number of service learning courses has increased significantly as there are more than 140 courses that work with various community organizations around the San Fernando Valley.

After receiving a plaque from President Harrison, Wilson expressed her gratitude for the commemoration and acknowledged that the progress attained after the earthquake was a community effort.

“I’ve had a wonderful experience today touring the campus. I have to believe that whatever you say about the buildings, the earthquake, and work is far secondary to the human relationships and bonding that occurred among us when we were here together. Where we are, is a magnificent, stunning institution to serve the people of the Valley, the people who are in the valley, the students who need an excellent university in the Valley.”

Some of the individuals who spoke in tribute of Wilson included various alumni, staff, and community members such as Don Cameron, William Watkins, David Honda, Joy Picus, Francine Oschin, and Steven Parker.

The monument located near the Donald E. Bianchi Planetarium, dedicated to Wilson reads as, “Dr. Blenda J. Wilson, third president of CSUN 1992-1999, in addition to leading the university through the 1994 Northridge earthquake during her tenure, she sustained California State University Northridge’s growth and excellence, affirmed the university’s commitment to student learning and success, and oversaw a period of significant construction. In honor of her leadership and legacy, this courtyard bears her name dedicated January 31, 2014.”