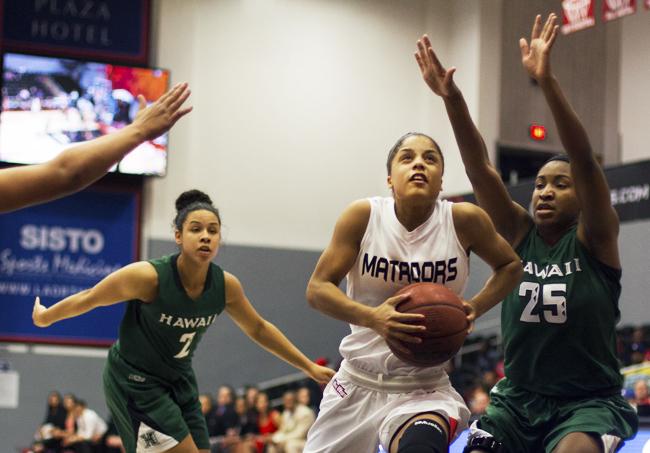 With key free throws scored during the last minute of overtime, the Matadors (10-12, 6-2 Big West) secured a historical first-program win against the Hawai’i Rainbow Wahine (10-9, 4-3 Big West) 75-72 at the Matadome on Saturday.

Making the best of Hawai’i’s three personal fouls in the last minute, CSUN landed all six free-throws in crunch time overcoming the Rainbow Wahine and obtaining a three-game winning streak.

“My teammates got me the ball,” said Matadors junior guard Janae Sharpe, who led her team with a career high of 27 points against Hawai’i. “We played as a team and we got the win”

CSUN kept a steady lead during the first half, closing out 39-27, with junior guard Ashlee Guay holding the half-high at 20 points with assistance from fellow guards Cinnamon Lister and Sharpe who contributed a combined 15 points at the half.

“We started out, we were doing well, we were playing our game, but then we started to get lackadaisical,” said Guay.

Head coach Jason Flowers agreed with Guay, noting his team’s defensive effort after the half worsened.

“In the first half I thought we were better (on defense),” said Flowers. “In the second half and overtime it wasn’t nearly as well.”

With layups and three-pointers Hawai’i closed the gap in the second half, sinking a 3-pointer with 11 seconds left on the clock that took the game into overtime with the score tied at 65.

Landing four of five of her 3-pointers, two of them within the last minute of the second half, Hawai’i’s junior guard Ashleigh Karaitiana, with an assist from senior forward Kamilah Jackson, brought the game into overtime.

Hawai’i secured the lead early in overtime with a jumper, holding off the Matadors until the final minute of overtime when personal fouls by the Rainbow Wahine’s Jackson and Karaitiana allowed the Matadors to secure a win.

“We had some silly mistakes,” said Sharpe. “We fought back as a team and played together.”

Landing both of her free throws CSUN’s sophomore guard Breeyon Alexander brought the Matadors within one-point of Hawai’i, whose lead was surpassed 28 seconds later by Guay with a pair of free-throws to put CSUN up 73-72. Seconds later, Lister furthered CSUN’s lead with two free throws from the charity stripe.

With four seconds left on the clock, Karaitiana, who landed six of her eight three-pointers, attempted a final three but it was blocked by Guay and recovered by Lister, who killed the clock.

Despite the Rainbow Wahine’s lead on shots from the field and three-pointers on the stats sheet, Hawai’i suffered with 20 turnovers and CSUN’s solid free-throw shooting of 71.4 percent.

Leading the game with 28 total points, Hawai’i’s guard Karaitiana also achieved a career high. She was followed by fellow teammate Jackson who achieved a double-double with 23 points and 13 rebounds.