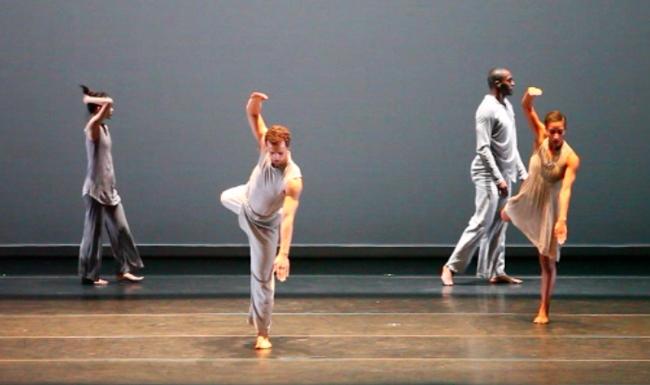 The Bill T. Jones performance begins with a round of applause on Saturday, Feb. 1, 2014 at the Valley Performing Arts Center in Northridge, Calif. (Photo by: David J. Hawkins/ PhotoEditor)

In an hour of action packed movement and live classical music the contemporary dance company presented three pieces as part of their chamber music program.

The night’s theme was well described with “Take something and do something with it, and then do something else to it,” a quote by Jasper Johns that accompanied the title of the show.

The program opened with the celebration of diversity in “Spent Days Out Yonder”, set to Mozart’s string quartet No. 23. Three male dancers began with angled arm choreography that ranged from sharp to fluid movement and finally involved the elegant ungulation of the entire body. As dancers one-by-one entered and crossed the stage in a single-file line, each with individual movement, one of the three dancers was replaced by a new arriving dancer. The diversity of the dancer’s height, build and gender lent a different quality to the group of three, creating a unique feel each time a dancer was replaced.

“Continuous Replay” presented how exciting variations of choreography sequences and sound can be.The piece began with shrill strings accompanying a frantically moving nude dancer. As the music abruptly halted so did the movement, whereafter a glance to the audience, a subtle arm swing became the foundation to a sequence that soon involved the entire body and the addition of several other dancers. As the the piece progressed, ambient sounds, escalation of strings, heavy breathing and the gradual addition of clothing facilitated in the build up of an interplay of sound and movement. This sequence culminated in a loud choral exhale by the dancers followed by an audience-wide cheer.

The 25-minute finale piece, “D-Man In The Waters”, kept audience members on the edge of their seat with its excellent exhibit of athleticism. Dedicated to the late company member D-Man, who died of AIDS, this piece lends a sense of light in an otherwise dark place. As the title implies, the piece exhibited choreography that was inspired by the characteristics of water. Just as water travels cohesively, so did the dancers, creating a sense of community. The playfulness of the music, Mendelssohn’s Octet for Strings, Op, 20, set the tone for a joyful end of the night, topped off with a standing ovation for the entire cast.