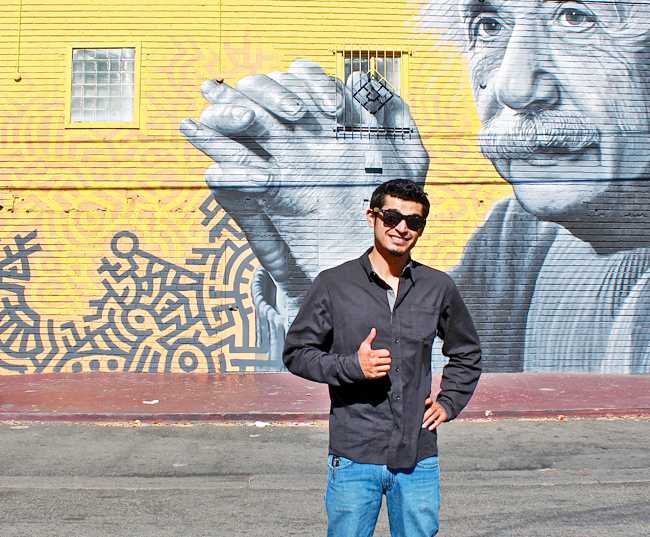 The section of Van Nuys Boulevard between Woodman Avenue and Foothill Boulevard has the same family-owned restaurants, cell phone retailers and gas stations. It might seem nondescript until you come across a psychedelic portrait of Frida Kahlo or a mural of the Mona Lisa in a sombrero holding a knife. Levi Ponce may not be a household name yet, but many people in the Valley are already familiar with his work.

The 26-year-old artist and Cal State Northridge alumnus started a community art project in his hometown of Pacoima, which has come to be known as the “Mural Mile,” and includes over 30 pieces.

His murals can be seen on the walls of schools, numerous local businesses and community centers. For Ponce, painting is the family business. He grew up helping his father, a muralist and sign painter, with projects.

“I always knew I’d paint murals,” Ponce said. “It was only a matter of time.”

After high school, he attended CSUN, where he studied animation, was a member of the Pi Kappa Alpha fraternity and graduated with a bachelor’s degree in art with an emphasis on animation.

“Animation encompasses everything,” Ponce said. “It lets me use design, drafting, math, everything.” Ponce has always had an enormous amount of pride for his hometown. “I grew up in the valley and wanted to stay local,” said Ponce about his decision to go to CSUN.

After graduation, Ponce began working as an artist in the film industry. He still works in film today when he’s not busy with murals or custom jobs.  The idea to start a community-based mural project came to Ponce in December 2011 when he was between jobs.

“I was bored watching Jerry Springer,” he said about his motivation. His first mural was of actor and valley resident Danny Trejo. Ponce used brushes and acrylic house paint to do the portrait, which he placed on the side of a local business.

The mural project took off and Ponce began to get other artists involved. “It’s such an artistic area,” said Rafael Andrade, owner of Myke’s Café.

Andrade commissioned local artists such as Ponce and other collaborators, including Kristy Sandoval and Ramiro “Rah” Hernandez, to paint a mural on the side of his restaurant.  “I didn’t want something to blend in,” Andrade said. “I wanted something colorful and different.”

The result has been a large collection of murals that stretches down Van Nuys Boulevard, turning one of the poorest neighborhoods in Los Angeles into a cultural hub.  Walking tours of the Mural Mile are offered periodically through the Museum of the San Fernando Valley’s Public Art Initiative.

Ponce and his efforts have garnered the attention of media giants like the Los Angeles Times, the Huffington Post and even  international media. He was recently named one of MSN Latinzine’s 10 Latinos to Watch in 2014. Yet through all the attention and success, he has kept his love for Pacoima at the forefront.

“It’s always easy,” Ponce said about how he chooses the subjects of his murals. “I just consider the neighborhood and the people. It’s unique with every situation. It’s kind of like being a matchmaker.

Ponce is also famous for getting the community involved in his work. He recently finished a mural at Telfair Elementary with which 30 students from the school helped paint.

“I allow everyone to participate — children walking by, delinquent kids, adults, the homeless,” Ponce said. “Everybody comes together to make this happen and I think that’s my biggest accomplishment, being able to rally the troops.

He is also still very passionate about helping other artists. “Don’t plan on doing something. Do it,” Ponce said. “Don’t wait on the money or time. Just do it.”