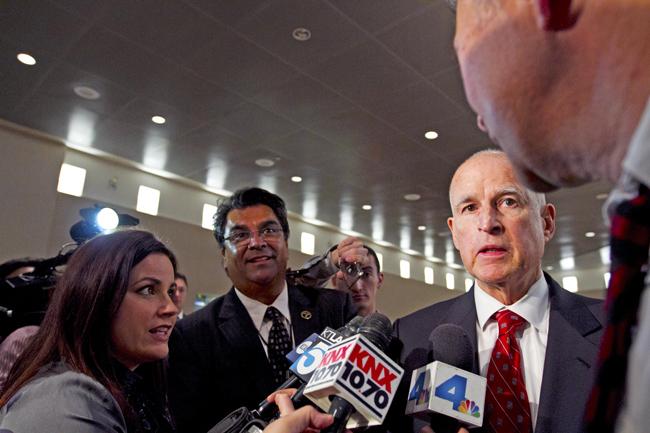 Governor Jerry Brown is surrounded by the media while answering questions about past budgets. Brown has recently proposed a $142.2 million budget for the California State Universities in a meeting in Long Beach, Calif. FILE PHOTO / Daily Sundial

Governor Jerry Brown proposed an annual budget on Jan. 9 allocating the CSU system an additional $142 million in state funding for the 2014-15 academic year.

The larger allocation is part of the governor’s four-year investment plan to increase state funding for public universities through 2016-17, according to Brown’s budget summary. The specific allocations of the funding can not be determined until the budget is approved by legislation.

The proposed $142.2 million is well short of the $237 million requested by the CSU board in November, which was based on a five percent increase in enrollment, said Stephanie Thara, web communication specialist of public affairs for the CSU.

Harry Hellenbrand, CSUN provost and vice president of student affairs, estimated that the Northridge campus could receive around $17 million of the proposed $142.2 million.

“It is not what everyone wants, but I understand it,” Hellenbrand said about the dollar amount allocated to the CSU’s.

Each CSU campus’ share of the funding will be determined based on campus size and enrollment, Thara said.

Hellenbrand said that due to mandatory costs such as increases in enrollment and building and renovation expenses, the funds proposed by Brown are not enough.

“It’s basically smoke money,” Hellenbrand said. “Take a look at a two-percent enrollment rate (increase) and that almost covers half of the money.”

The proposed additional funds can be used for completion initiatives, enrollment growth, maintenance needs and other mandatory costs, according to the budget summary.

President Dianne Harrison, but the goal is to combat rising costs of tuition and fees, Thara said.

Brown has the opportunity to revise his budget proposal in May.
It’s basically smoke money. Take a look at a two-percent enrollment rate (increase) and that almost covers have the money.

This academic year marks the fourth straight in which students will not see a tuition hike if Brown’s proposal is implemented.

Tuition has been frozen since 2010-11, but the $5,472 tuition cost does not include the additional $1,053 in fees that CSUN students pay for various facilities and services. Combined with books, living expenses and transportation, the estimated cost of attendance will range from over $15,000 to $23,000 in 2013-14, according to CSUN’s annual cost of attendance.

Kiyumi Brocious, a graduate student majoring in geography, began school when the tuition hike started. She is encouraged that tuition hasn’t gone up in the last several years.

“I am glad to see tuition is (deadening) off,” Brocious said.

Daniel Aburto, freshman history major, said he is glad tuition will not go up, and is concerned about the students who need loans for school expenses.

“I’m fortunate to be able to pay for school, but I worry about those less fortunate than me,” Aburto said.

Aburto said he hopes to start seeing the $5,000-plus tuition cost decrease as he continues to pursue an undergraduate degree.

Brown’s budget proposal also outlined a change which would allocate funds for universities that help students graduate efficiently in four years. The administration’s long-term plan is to move away from state funding based on number of enrolled students and instead focus on the quality of programs.

A $50 million incentive will be set aside for programs that integrate technology at CSUs, according to the summary. Special emphasis will be on university programs designed to help students graduate in four years, increase the amount of bachelor’s degrees or transition from community college.

The additional funding is aimed to help CSUs eliminate bottleneck courses, which are the limited, high-demand classes required as prerequisites for major curricula. Fourth-year graduation can be prolonged because a student is unable to take a bottleneck course.

Kelly Nicolas, fourth-year senior business major, said she will probably be at school longer because of limited availability of a required accounting class.

“It is really unfortunate that your graduation is prolonged, and it is not even your fault,” Nicolas said. She said she hopes CSUN will be able to offer more of the high-demand classes for students.

Brown’s budget highlights the Middle-Class Scholarship Program aimed at discounting tuition by 40 percent for middle-class students by 2017. The act, which was signed into law last year, will provide $107 million in tuition discounts for middle-class students in the 2014-15 academic year, Thara said. The act will provide scholarships for families with annual incomes of up to $150,000.

After this year, the act will increase funding until it reaches the peak of $140 million in discounts for 2017. The act is geared toward providing tuition discounts for middle-class families who are unaided by Cal-Grant and hit hard by fee and tuition increase, according to the budget summary.

Hellenbrand said state funding is a “strange game” and that even though the government has decreased funding, it is giving it back through grants and other incentives.

“It is like they are taking away five fingers with one hand and giving you four fingers back with the other hand,” Dr. Hellenbrand said.

The Middle-Class Scholarship Program will bring changes to the Cal-Grant system. For students who were denied renewal of their Cal-Grant due to an income increase, the budget proposal allocates an extra $14.9 million into a fund so they can reapply for a grant if their income falls below the eligibility limit. This can happen no more than three years after a student has received their original award.

Garrett Aril, a graduating senior and biology major, said he will not be affected by the budget because he is done with school. He said any investment in education is important because it is an investment in the country’s future.

“I wish [additional funds] came sooner, but nothing can ever come too late,” Aril said.

In addition to expenses, Hellenbrand said the $142.2 million is not a sufficient amount for staff and faculty salary raises, which he said have not had a “meaningful” increase in the last five to seven years. Hellenbrand also said CSUN needs more funding for buildings and renovations.

Harrison feels the tuition freeze proposed by Brown’s budget is beneficial for all involved at CSUN.