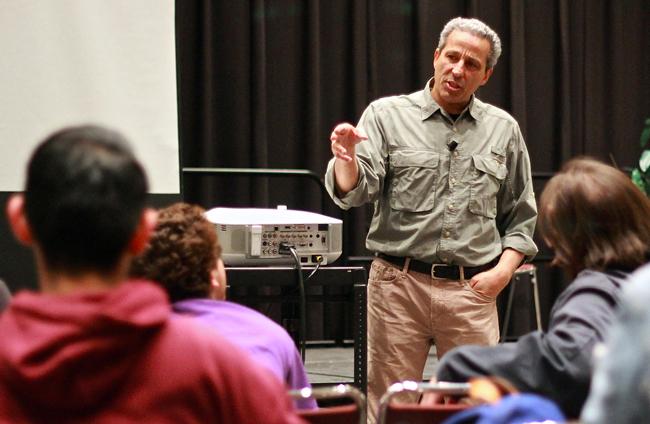 Ed Kashi, a renowned photojournalist, visited CSUN and discussed his career as a journalist and filmmaker. Students gathered at the Northridge Center to hear Kashi speak about his many projects and to teach students how to balance life as a photojournalist.

Kashi is a freelance photographer who has set out to do advocacy work around the world. He has been recognized for his work, including winning second prize in the contemporary issues singles category in the 2011 Press Photo Contest, and UNICEF’s Photo of the Year in 2010.  Kashi is admired for his portrayal of various human conditions.

“Advocacy journalism is part of my practice,” Kashi said. “It is a part of what I do. It is something that didn’t exist a few years ago.”

Kashi said the project he is most proud of is his work in Nicaragua, where he covered the story of an epidemic of chronic kidney disease of unknown origins. Kashi followed families as they attended several funerals of loved ones. These citizens are dying by the thousands from the disease.

Kashi is trying to raise awareness of this disease for the families that are enduring the loss of loved ones. He has worked with the site Indievoices.com to raise money for the families. Kashi told his story through visual storytelling and short clips of the families.

“When you point out all the problems in the world, you will start to lose readers’ attention,” Kashi said. Kashi said it was easier for him to engage his audience through photos, rather than words.

Along with engaging his audience, he wants to be “engaged with the world.” He has always been a naturally curious person, which is why he believes he has been so successful in his career.

Being a photojournalist has not always been the easiest thing . Kashi said it is a high-stress job that involves a lot of sacrifice. Kashi is a father to two teenage kids.

“I have missed more than half of both my childrens’ lives,” he said. It has not always been easy for him, which is why he chose to start a daily journal for his wife.

This journal inspired a book he published called “Photojournalisms.”  It was a compilation of all the entries he did over a 20-year period. It has been available for almost a year and a half and has received great feedback.

Although it has been difficult for him to leave his family to do his job, Kashi said if he did not have the support of his family, he would probably be “clinically insane or on drugs.”

“I don’t know how people who don’t have families do this,” he said.