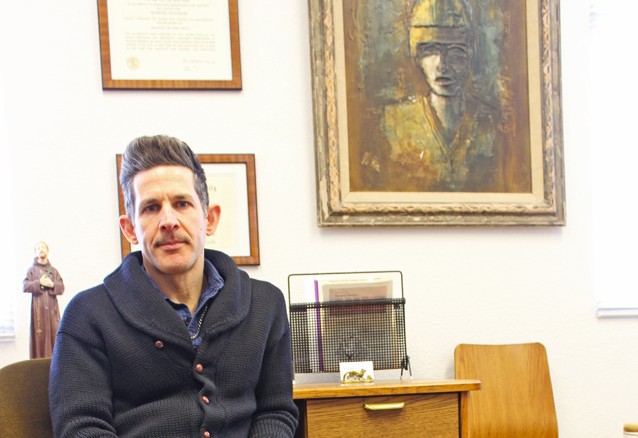 Looking back on the years he spent in college studying English and literature, Louisiana native Martin Pousson can’t help but imagine that’s what made him a better writer – a published one at that. But he never expected his stories would lead him to win an award.

Pousson, a CSUN English professor and author, was recently given the NEA 2014 Creative Writing Fellowship and a grant of $25,000 for his latest short story collection, “Black Sheep Boy,” a coming of age story. Pousson was one of only 38 honorees from among over 1,300 submissions to be chosen. As of now, he has yet to decide what to do with the grant he was awarded.

But what you may be wondering is how an author like Pousson gets the ink flowing.

“When I write short stories, I feel like I am working on an artwork,” Pousson said. “I want my novels to inspire readers and help them illuminate ideas.”

With every story he writes, Pousson’s main attempt is applying social issues that can be seen in society, including certain groups and people being targeted negatively.

To him, writing is a form of artwork that can portray an image of society that people wouldn’t otherwise take note of. In “Black Sheep Boy,” the stories are meant to help readers understand issues that involve personal identity and disintegrating cultural society, Pousson said.

Besides being an English teacher, Pousson also teaches queer studies. As a member of the LGBTQ community, he emphasizes the need for acceptance and understanding those who choose to express their activism even if it’s done rebelliously.

The word “queer” is often misinterpreted, leading others to believe that it means those who identify with the term are automatically gay, Pousson said.

“The queer movement started in the streets as a form of rebellion protest,” Pousson said. “I believe that anyone could be a queer and not be gay. There are some people who behave like queers but they confess on being heterosexuals. The media is responsible for presenting a stereotyped depiction and behavior of a queer.”

Though there has been much struggle to pass a law allowing gay marriage across the U.S., Pousson believes that marriage equality is a notion that will eventually be accepted.
Everyone should be equal no matter the differences or distinctions people set against one another, Pousson said.

Though Pousson is now an award-winning author, he admits he still faces writer’s block and that “Black Sheep Boy” took him two years to complete.

“Occasionally when I start writing a new short story I may struggle what to add in,” Pousson said. “[The] difficult part is spending hours figuring out what details to choose in a paragraph. However, what helps me with adding details in a story is listening to music, thinking of Louisiana’s regional landscape and fictional characters to add in a story.”

Pousson feels that he benefits from writing stories not only because his skills advance, but because he can visualize which details to add next. These strategies help him produce scenes full of imagery for his stories.

Stephanie Hernandez, an English major, has Pousson for her senior seminar this semester. Like many of his students, she views Pousson as a mentor and finds his teaching methods to be inspirational.

“I believe professor Pousson is a great, cool and fun teacher who tells jokes and makes learning entertaining,” Hernandez said. “He’s helped me become a better writer as a result.”

What Pousson expects from his students is full authenticity, a unique voice when writing creatively, and socializing with classmates to better understand diverse opinions.

When Pousson isn’t busy advocating equality or teaching classes, he indulges in bicycle riding and reading. These hobbies are a form of escapism for Pousson, helping him temporarily give his mind a rest from a busy life of being a teacher and author.