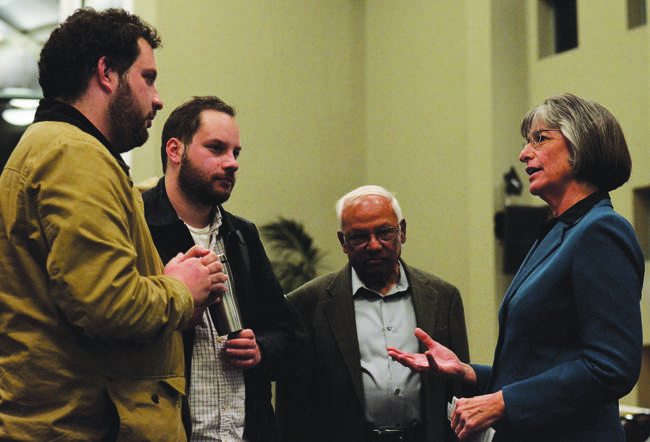 “It is a privilege to be here at my alma mater,” Lingle said. She graduated from CSUN with a bachelor’s degree in journalism in 1975. Now a professor at CSUN, Lingle teaches in the political science department and expressed her delight when seeing her students among the audience.

Lingle emphasized how her most important skill in politics was the ability to understand the media, a key factor that she learned from the CSUN journalism department.

Members of the audience were prepared with questions, ranging from campaign and environmental issues to best and worst experiences. Both governors were eager to respond and share with the public their experiences.

“I don’t want to discourage people who want to run for public office,” said Dukakis when discussing the difficulty that comes with holding a position in public office.

He told the crowd filled with students aspiring to be politicians to believe in themselves, to be optimistic.

“If you don’t believe you can make a difference, don’t go into politics,” said Lingle in agreement with Dukakis.

Now a professor at CSUN, Lingle teaches in the department of political science and expressed her delight when seeing her students among the audience.

“I’m very passionate about making a difference,” said Adriana Cabrera, 21, something that the former governors agreed was essential to becoming a part of the system.

Exercising her right to hold office, Cabrera is currently the education representative in her South Los Angeles neighborhood. “I live every day with everything bad that happens… I want to apply it back one day,” Cabrera said.

Both individuals shared their political concerns, although no longer in office. “It’s important to understand what the problem is,” said Lingle, when discussing the importance of establishing solutions.

From energy and environmental issues to education and immigration reform, each political agenda was clear. However, one topic that was discussed heavily by Dukakis was Obamacare.

Lingle emphasized how her most important skill in politics was the ability to understand the media, a key factor that she learned from the CSUN journalism department. Although she knows that the communication industry has changed over time.

One of the greatest challenges they face is keeping up to date with social media and new technology. Lingle said that she believed that voting could quickly become an online tool. However, Dukakis was quick to shut that idea down.

When the topic turned to democracy, Dukakis said that other countries are struggling to achieve it.

“A lot of people are fighting and dying to get it, we have it,” Dukakis said.