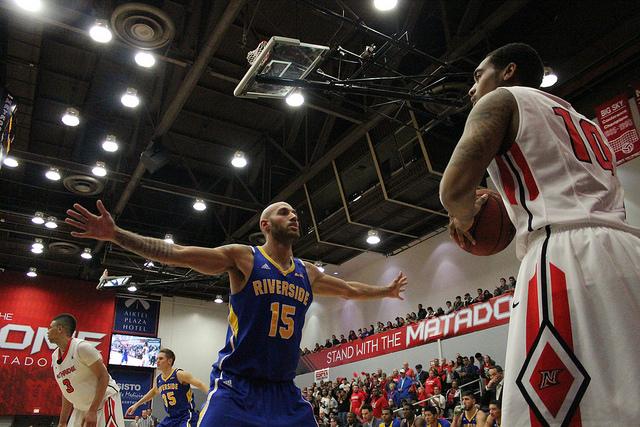 The Matadors (11-12, 3-5 Big West) have had a tough time winning in 2014, having lost six out of their last nine games, five of those losses coming in Big West play. CSUN will look to bounce back this weekend as they take on two teams that have struggled this season.

CSUN will kick off its weekend on the road against the UC Davis Aggies (7-15, 2-5 Big West) at the Pavilion. The teams met on Jan. 10 to open up their Big West Conference season with the Matadors prevailing, 89-77. Cal State Northridge performed well, shooting 62 percent from the floor, and controlled most of the game. The Aggies should put up a fight on Thursday as they try to climb the Big West standings themselves.

The Cal State Fullerton Titans (7-13, 2-4 Big West) will be seeking a rare road victory when they visit the Matadome on Saturday. The Titans have gone 2-8 on the road this season, but will give the Matadors trouble with team-leading scorer senior guard Michael Williams, who is averaging 16.1 points per game.

Should the Matadors win both weekend matches, they will improve to .500 and get back in the Big West Tournament picture.  Currently sitting at sixth place, the Matadors could potentially fall into ninth place with a poor outing this weekend.

Currently sitting at second place in the Big West Conference, the Matadors (10-12, 6-2) will carry last Saturday’s momentum into Thursday’s home bout against their Big West rivals, the UC Davis Aggies (9-11, 4-3).

The Matadors are coming off a thrilling 75-72 overtime win against the University of Hawaii Rainbow Wahine (10-9, 4-3).

After her 26 point outing against the Rainbow Wahine, junior guard Ashlee Guay will look for her sixth twenty-point game of the season, as CSUN seeks their fourth consecutive conference win against Davis. The Matadors defeated the fourth place Aggies 56-52 on Jan. 9.

The Matadors will continue to chase the Big West Conference leading Cal Poly Mustangs (13-8, 7-1), as they travel to play the Cal State Fullerton Titans (7-12,3-3) Saturday. It will be the Matadors’ first meeting of the season with the Titans, whom they swept in last year’s season series.

Titan senior guard Alex Thomas should give the Matador guards trouble, as she is scoring 19.7 points per game in conference play this season.