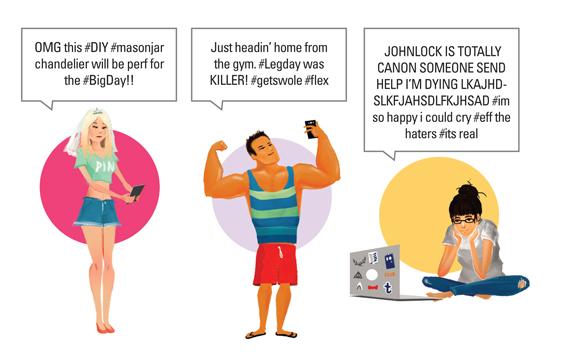 Why wait around for a man to get married? The best part is clearly the planning stage, and Penny’s got everything down to the napkin holders covered. She’s got five or six different boards on Pinterest, one for a different theme of her future wedding. Everything is Do It Yourself (DIY) and has a “rustic chic” vibe, complete with enough mason jars to start her own jam company. Penny can usually be found at the back of any classroom, oohing and ahhing over wedding dresses on her CSUN-issued iPad.

Time is precious, and Vince knows how to spend six seconds. Through the use of ridiculous hats, advanced slapstick humor and the occasional exploitation of adorable animals, he’s developed a huge following on Vine — approximately 18 people. Casual Vine-ing is for wimps, so Vince edits his videos on iMovie for maximum hilarity.

Prone to frequent outbursts of hysteria, Tammy is kind of…emotional. Whether it’s crying over the latest BBC Sherlock episode or a post full of small animals wearing hoodies, Tammy is feeling a lot of feelings and openly blogging about them. Unlike Twitter or Instagram, tags aren’t used properly for tracking trending topics, but more so to chronicle her #innermonologue. Usually found wrapped in a blanket (an act often called “burritoing”), Tammy rarely leaves her domicile unless tempted by food or the loss of wi-fi.

In 2007, Facebook was the place to be. Fast forward seven years later, and the only person still frequently using the site is your grandmother. She posts generically unfunny e-cards and writes letters to you via comments on all of your photos, usually with the caps lock on by mistake. When she’s not posting photos of her cooking, she tries to google things using the status update box.

If there is a celebrity within a 15-mile radius, Tia will find them. She follows all of the hotshots on Twitter, and if one of them sets foot nearby, she’s on the hunt.

She is intimately aware of Miley’s tweeting habits, knows what time Zach Braff prefers to post, and is constantly up to date on TMZ’s news tweets. She will compulsively retweet anything they post, all in the hopes that some star will notice her awesomeness and immediately become friends with her. Unrealistic and creepy? Tia prefers the terms “dedicated” and “outgoing.”

Izzy likes to think of Instagram as his own personal pep talk. Mostly featuring oversaturated snaps of his various workout equipment, tank tops and protein shakes, his account serves as undeniable proof that he works out hella hard and hella often. Plus, it’s a great way to show off to the world how ripped he’s been getting.