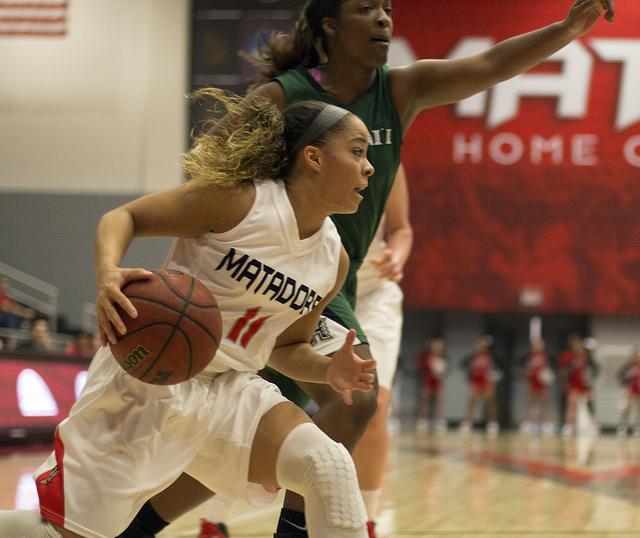 Despite CSUN winning the jump and taking it to goal for the first score of the game, UC Davis quickly countered with two consecutive 3-pointers and established an early lead with long range shots that would prove problematic for the Matadors.

“We kind of let them shoot too many threes in the beginning of the game,” said CSUN junior guard Cinnamon Lister who led her team with 18 points. “That’s where it hurt us.”

Making good with 30 defensive rebounds and landing 21 points in 3-pointers alone, the Aggies kept CSUN in check during the first half.

“That’s where our breakdowns were, is letting their best scorers get open looks,” said Lister.

By landing 70 percent of their shots in the first half, the Aggies’ offense proved to be a problem early on for the Matadors.

“I don’t think we executed our scouting report as much as we needed to,” said Matadors center Camille Mahlknecht who leads her team in blocked shots. “We knew they were a good 3-point shooting team and I don’t think we made a good enough effort to stop them.”

Starting the second half 35-28, CSUN managed to close in on the Aggies’ lead by upping their defense and landing 3-pointers to close in with UC Davis.

Coming off a steal from CSUN’s junior guard Randi Friess, Mahlknecht took it for two with a layup which was shortly followed by a pair of free throws from Ashlee Guay, bringing the Matador’s within two points of Davis at 61-59..

CSUN and Davis traded free throws until the Aggies’ junior forward Sydnee Fipps, who lead the game with 21 points and stands second in conference in shooting, landed a decisive three that increased Davis’ lead 66-61 with 1:46 left in the second half.

CSUN was unable to close the gap in the remaining time and Davis kept their lead with solid free-throw shooting.

Davis’ offense showed on the stats sheet, shooting 60 percent for the game, with 50 percent on 3-pointers and 89.3 percent for free throws.

CSUN’s Mahlknecht proved to be a strong defensive asset for the Matador’s, recovering 10 rebounds and landing her 12 points within the key.

The Matador’s Guay, who stands behind Davis’ Fipps in shooting for conference this season, obtained seven assist in the game against Davis, setting a new school record of 344 career assists and surpassing previous record holder Jamie McCaa’s 340.

With the loss against Davis, Cal State Northridge maintained second place behind the Cal Poly Mustangs (13-8, 7-1 Big West) in conference, who continued a six-game-winning streak with a victory over the UC Irvine Anteaters (11-11, 4-4 Big West) Feb 1.