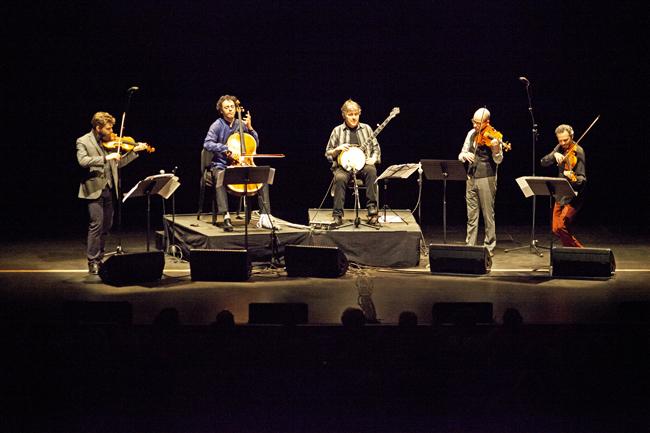 Legendary banjo player Béla Fleck and string quartet Brooklyn Rider performed Friday night at the Valley Performing Arts Center. Fleck is the recipient of 14 Grammy Awards and has been nominated in more categories than any artist in Grammy history. Brooklyn Rider is also an acclaimed group of musicians who are described as the future of chamber music by Strings magazine.

“You might be wondering what a banjo is doing with a string quartet…or vice versa” Fleck jokes with the audience. This becomes apparent as a new generation of rhythm surfaces during the performance. Suddenly, the melodies slip off Fleck’s fingers in a medley of history that occasionally conjure the crackly haze of old-time America, haunting ballads, folk legends and political troubadours. Brooklyn Rider simultaneously shepherd a spiritual energy compelling the banjo to rise into an instrument that has the ability to transcend folk and country music genres. For a moment the pearly Baroque period crosses over into the realm of a gritty dustbowl and both appear to click into one. Combined with the banjo, the string quartet is reinvented and unfurls into a daring territory with Fleck at the very center of it.

The upbeat Southern twang often associated with banjos is softened by the harmony of the slick and sharp quartet. In the lengthier, “Night Flight Over Water” the music begins to escalate and shift into a primal edge guided by the master instrument which tells a story left for interpretation. This experimentation continues through “Brooklesca” and in “Rain Dance” where the sound of pelting rain is imitated through intricate plucks on the banjo and violin. Jason Ramos, 24, a junior majoring in sociology says the performance was, “the average mix of instruments I’ve ever heard in my life.”

Fleck also paid tribute to folk musician and activist Pete Seeger by performing some of Seeger’s classics such as, “Turn! Turn! Turn!” (To Everything There is a Season) and “We Shall Overcome” which was hummed by a nostalgic audience.

Fleck allows music to evolve in a way that challenges societal boundaries, stereotypes and expectations. Brooklyn Rider likewise embroiders youth and personality into a genre of music that today is often underappreciated. It remains difficult to separate the very specific categories banjo music is wedged into. However, this unpredictable departure from the norm allows the listeners to silence that “Dueling Banjos” scene and for a moment transform the banjo into something as elegant, ornate and narcotic as an orchestral instrument.