Women’s Basketball: Defense leads the way in victory at CSUF 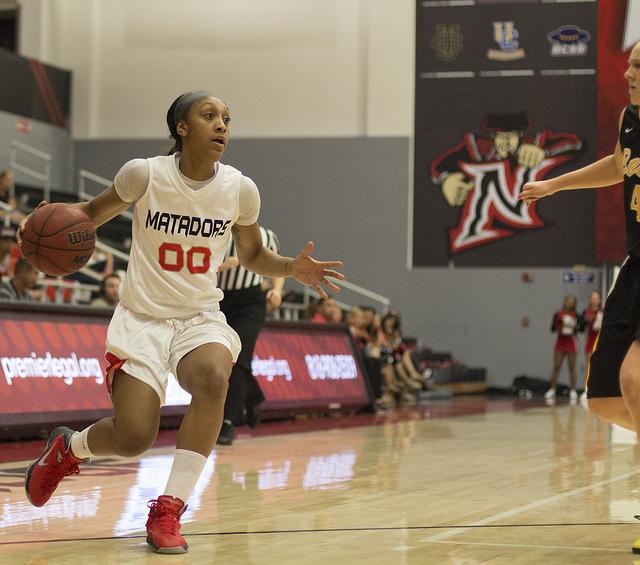 The Matadors (11-13, 7-3 Big West) maintained a strong defense against the Cal State Fullerton Titans (8-13, 4-4 Big West) 76-54, securing a road victory and recovering from their home loss to the UC Davis Aggies on Thursday.

With effective defense from junior center Camille Mahlknecht and an effective offense from junior guards Ashlee Guay and Cinnamon Lister, the Matadors put enough points over Cal State Fullerton to secure their fifth road win of the season.

Despite trailing Fullerton 4-0 in the start of the first half, the Matadors managed to gain and hold their lead with strong shooting.

Benefitting from a personal foul by the Matadors, the Titans landed a pair of free throws in the first minute of the game and a layup a few plays later, but fell behind later in the half.

CSUN senior guard Haley White, coming off the bench at 15:38 in the first half, sank a jump shot that set up an exchange of the lead between the Matadors and the Titans.

With several personal fouls from Cal State Northridge, the Titans managed to match CSUN’s 21 points at 8:21 in the first half, but CSUN junior guard Janae Sharpe broke the tie with a series of shots.

Beginning with a jump shot, Sharpe helped secure a lead for CSUN with a pair of free throws from the charity stripe.

Though Cal State Fullerton managed to stay within reach of the Matadors’ lead as the half came to a close, the Titans gave up two 3-pointers to Lister in the last few minutes, closing the half trailing 42-33.

Upping their defense and collecting rebounds, the Titans made an initial jump shot going into the second half, but the Matadors maintained a strong defense and put up enough points to secure a comfortable lead over Fullerton.

CSUN took their lead to 20 points over Fullerton toward the middle of the half with layup and jump shots from Mahlknecht, Lister and Sharpe. Cal State Fullerton attempted to close in on CSUN with long-range shots as the half began to close but were unable to land any 3-pointers.

In the final minutes of the game Fullerton landed two 3-pointers, the first from senior guard Brianna Barfield and the second, with six seconds left, from junior guard Tailer Butler, but it was not enough to close in on CSUN.

CSUN shot at 49.2 percent for the game, with Guay leading with 26 points, followed by Lister who had 16.

Fullerton managed to sink 85 percent of their free throws but suffered with a 28.6 percent shooting average for the game.

Mahlknecht shut down the Titans in the paint by making six of seven blocks for her team and recovering 14 rebounds.

The Matadors will travel to the central coast Feb. 13 to face the Cal Poly Mustangs (14-8, 8-1 Big West) who hold first place in conference. CSUN trails behind the Mustangs in conference, who continued their eight-game streak with a win against the Hawai’i Rainbow Wahine (11-10, 5-4 Big West) Feb 8.

Cal Poly, who has only suffered one loss in conference play, lost their first game against Cal State Northridge 81-76 at the Matadome earlier this season