Students do not buy textbooks immediately due to cost 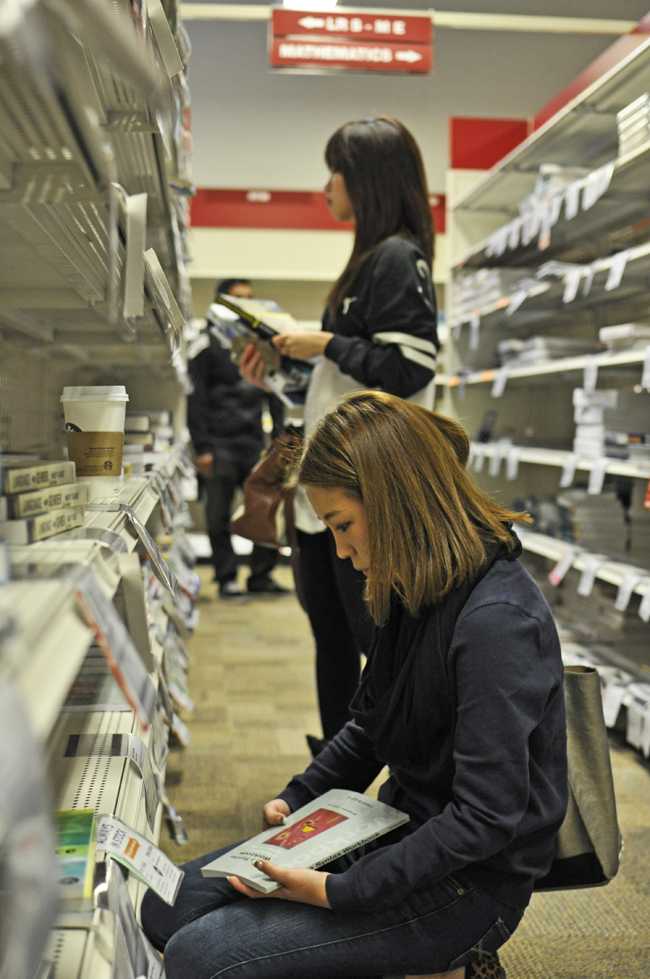 CSUN students Momoko Arai, 24 (front) and Yoon Ju Lee, 21 (back) both whom are Linguistics Majors are searching for their course textbooks in the Matador Bookstore on Monday, Feb. 10, 2014 in Northridge, Calif. (Photo Credit: David J. Hawkins / Photo Editor)

CSUN students have engaged in a nationwide trend of avoiding the purchase of textbooks at full cost by seeking alternative means for acquiring course materials.

The way in which students are obtaining course materials has changed among college campuses nationwide and can be directly linked to the high cost of books, according to the January report “Fixing the Broken Textbook Market.”

“Textbook costs have risen astronomically in the past few years,” said Ethan Senack, the report’s author.

Senack, the higher education associate for the Public Interest Research Groups (PIRG), examined the textbook purchasing habits of 2,039 students enrolled at 150 university campuses across the nation.

In his research, Senack found that 65 percent of surveyed students did not buy a textbook because it was too expensive, and 94 percent of those students expressed concern about the effect not having the required text would have on their grade.

“Manufacturers continue to drive up prices,” Senack said. “Prices have increased on textbooks continually for the past, practically, 30 years.”

“Price, over time, has become an obstacle for students,” Berger said. “So much so they’re avoiding acquisition of materials all together.”

Denaidu Solis, 19, freshman undecided major, said that she prefers to purchase her textbooks through Amazon.

“If we try to get them here at school, they are very expensive,” Solis said. “Not only do some professors want the new edition, but having to get (it in the bookstore) would be horrible.”

Aware of students’ apprehension toward the price of textbooks, the Matador Bookstore has responded with alternative options for students.

“We are always trying to provide students with a choice, knowing that price is a consideration,” Berger said. “Our Rent-A-Text program often provides greater savings to the student than a used book.”

Junior Belen Lomeli, 22, psychology major, spent $500 on textbooks for the spring semester. She prefers to purchase her books used so that she can resell them once she is done using them.

“If I would have rented [the book Essential Statistics for the Behavioral Sciences, 8th edition], I wouldn’t have gotten anything back,” Lomeli said speaking about a book she purchased for a spring class.

While selling her books on Amazon, Lomeli noticed that people preferred used books that were notated because it gives them a better understanding of what is required from the course.

“I see that people pay me more if they have notes than if they didn’t,” said Lomeli, who prefers her books highlighted and marked as well.

Having purchased three used textbooks, Lomeli said she had to rent two others because she was unable to find a used copy of the newest edition.

In addition to offering textbook rentals and buybacks, the bookstore also provides e-books on their website.

Some professors provide a reserve copy of their textbooks in the Oviatt Library. Solis said she has a teacher that does this, but because she commutes to CSUN, it is not a viable option.

Lomeli said she has had teachers who permit an earlier edition of the required textbook, but she prefers to just to get the newest edition.

“You still have to purchase the newer edition that they ask for because you are going to miss out on so much,” Lomeli said.

Despite the introduction of e-books into the market by publishers, they don’t remedy a market that is controlled by manufacturers who intentionally exercise tactics to keep prices high, according to the report.

The report also stated that manufacturers drive prices up by packaging textbooks with additional materials, introducing cheaper loose-leaf copies with little or no resale value and releasing new editions every four years.

With the findings presented in Senack’s report, it is stated that unless textbooks prices drop, there will continue to be a problem. The report proposes that schools should seek to develop their own open textbooks that would be free to download and affordable in print.

“We really need to encourage a method of textbook publishing that is outside of the traditional market, which isn’t controlled by these gigantic publishers,” Senack said.

Senack said PIRG have been working with faculty across the country on an individual basis, but they are trying to push for an institutional change and get campuses involved in the growth of open textbooks.

CSUN has paired the fall 2013 semester’s adoption of the myCSUNtablet initiative with the eText program, which encourages professors and faculty to create their own course materials that are accessible through an iPad to allow for more affordable and accessible learning materials.

Berger said that with the myCSUNtablet initiative, there have been more classes using e-books than there were the previous year.

Senack’s study also showed that nearly half of all the students claimed that the price of books had an effect on what courses they decided to take.

Lomeli said she does not choose classes based on the expense of required materials.

“In my case I have to do what I have to do to pass my classes,” Lomeli said. “If it means I have to buy expensive books, then so be it.”