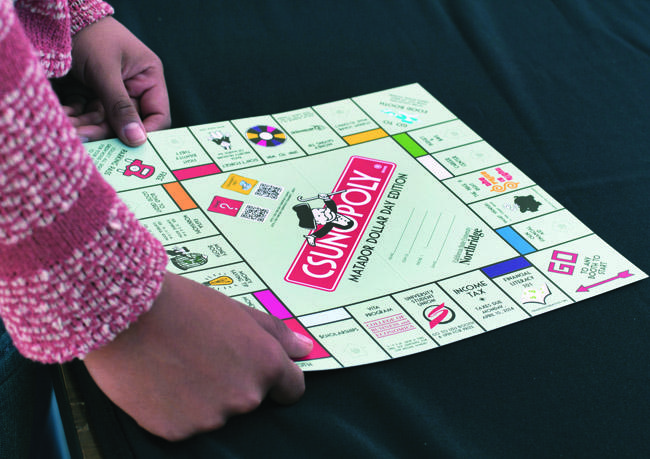 The fourth annual CSUNopoly provided students information about saving money in college, and transformed the USU into a clever board game styled event reminiscent of Monopoly.

Students collected information and handouts from tables around the board game themed USU. The booths were colored to create the nostalgic feel of Monopoly properties. Experts tabled at a wide range of booths with topics including scholarships, student loans, road to good credit, money tools at CSUN, and budget & save.

Brian Canedo, a freshman computer science major said, “(The Monopoly theme) was very clever, since saving money is the point of the game.” He said the event was cool because of the amount of information about scholarships and financial aid.

Gregorio Alcantar, financial aid counselor, helped organize the event as a response to information students requested in the Financial Aid Office. He said the event provides a visual component for students, opposed to talking with faculty in the office.

“There has been great feedback,” Alcantar said. “Students seem really interested since it is not students at the booths, but real professionals are talking about financial aid.”

The Monopoly themed event made sense, as the game is about saving money, according to Alcantar. He said this is the events’ ninth installment, and the fourth edition of the current CSUNopoly format.

“The USU is the hub of where students hang out.” Alcantar said about the importance of having the event in the USU.

The collaborative event featured interactive games provided by the USU. A Price is Right Style game offered students a chance to win a prize by guessing the cost scantrons and other supplies.

Each student who visited four booths or “Avenues” got a sticker. After collecting enough stickers, students were rewarded with a Hot Dog on a Stick, similar to the award for passing ‘Go’ in Monopoly.

Matadors had an opportunity to “Go to Jail” with a photo booth shaped like the “Go Straight to Jail” board space from the Monopoly game. The Monopoly theme continued as some students wore top hats.

Matadors could win an actual Monopoly Board Game by collecting 20 Blue Monopoly Dollars in a money booth, as other dollars flew around them in the glass box.

Freshmen Abigail Tapia was able to collect enough blue dollars in the Money Booth to win an actual Monopoly game. She said the game theme made the event fun and exciting.

Tapia said the game will not be the only thing she takes away from the event, because the scholarship and financial information was very helpful.

“Instead of waiting to ask them questions, they [professionals at the booth] answered all of the questions I had.”