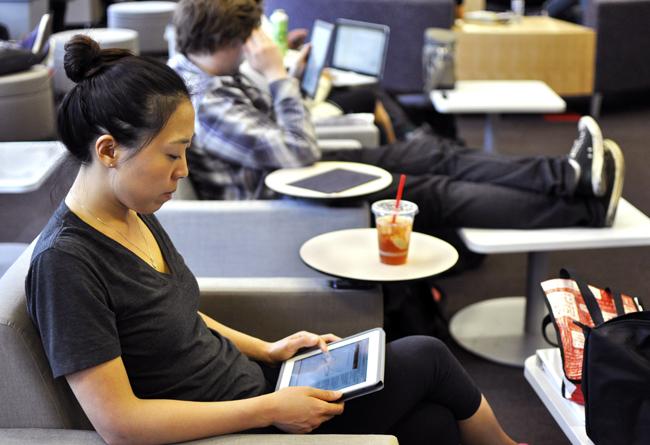 Increased ownership of e-readers during the 2013 holiday season shed light on a growing national trend in which 50 percent of Americans now own either a Nook, iPad, Kindle or some other type of electronic reading device, according to a study conducted by the Pew Research Center.

“Americans seem to like different formats for different reasons,” said Lee Rainie, director of the research center’s internet project. “Sometimes they like e-book reading devices and tablets because they can store so much more content so easily and it doesn’t weigh a lot. While other times, they like printed books and such because they are easy to share.”

Over the 2013 holiday season, tablet ownership rose to 42 percent of American adults, an eight percent increase since last September. E-readers like Nooks and Kindles also jumped from 24 percent last September to 32 percent as of January, according to the study.

“I love using my iPad at school even though I’m not in one of those classes where you must have one,” Greene said. “It is easy to use. I love to read on it, e-mail and watch movies on the go or when I’m on break in between classes.”

The rise of e-readers and tablets can be seen at college campuses. CSUN started the myCSUNtablet initiative last semester, where seven programs welcomed the use of iPads or other tablets in the classroom. The programs include liberal studies, biology, engineering and computer science, public health, journalism, physical therapy and kinesiology. The initiative was created in order to save students money in the long run, according to the initiative’s website.

Justin Ramirez, 24, senior, psychology major uses his Nook for reading magazines, books, news articles and even to watch some movies.

“I’ve had my Nook for about two years and it really makes reading easy and fun for me,” Ramirez said. “I like the wide selection of things offered and with the push of a button I have a new book or movie without having to go out and it is a lot cheaper too.”

People swap between e-readers and hard-copy books depending on the task at hand, according to the Pew study. In the last 12 months, 83 percent of the people that own a tablet prefer it when it comes to buying books because it is easier and faster. However, 83 percent prefer a hard copy of book over the tablet version when it comes to reading with a child.

Additionally, 69 percent of people believe sharing things in person is easier to do than on a tablet. E-readers or tablets were preferred among those reading books in bed or traveling, according to the study.

Kindle reigns supreme
In 2013, the Amazon Kindle was the most popular e-reading device, beating out the Nook and other similar devices, according to an e-reader study by statisticbrain.com. The study said Kindle dominates the e-reader market with 48 percent of consumers owning the device. In comparison, the Nook from Barnes and Noble accounts for 16.9 percent of the market.

Jessica Munoz, 18, biology major, is an avid user of her Kindle.

“My Kindle is my go-to for everything electronic,” Munoz said. “It is way cheaper than a laptop or other tablets. It’s amazing. I bring it with me every day when I’m on campus and the battery life is awesome. I have lots of classes on Moodle so it really only helps me stay on track and keep me organized with my school work and online classes.”

Print still prevalent
While the quantity of people who read e-books is dramatically increasing, very few have completely replaced print books for only electronic forms. The Pew study found that only four percent of people exclusively read e-books.

In addition, the Pew study reported that 69 percent of adult Americans had read a printed book in the past 12 months, making printed books the number one preferred format for reading.

Yocelin Martinez, 20, junior liberal studies major, does not like using her tablet for studying or reading books.

“I’m more of hard-copy person,” Martinez said. “I need it in my hands. It is just the way I learn. I can read and highlight on a tablet, but actually doing it on real paper makes a difference for me, and I feel like it really sticks to me when it comes to studying.”

Martinez feels there are some positives to the rise of digital reading devices, but still appreciates the experience of owning an actual book.

“I do think tablets will continue to grow and they will be more involved with education like in schools and it is not a bad idea,” Martinez said. “The pleasure of holding a book and feeling the pages with my fingers will be hard to replace. So I guess I’ll have to get used to some things being electronic only.”

The rise of tablets hasn’t worked well for everyone, Rainie said. He also said the escalation of eBook reading has affected and brought up many challenges to library communities and their publishers, who have different pricing policies when they are selling e-books rather than selling printed books.

Rainie said the trend of tablets everywhere will continue to increase for a while, but he said he can’t really predict what will happen until more research is done.

“We are moving away from the desktop age of computers to mobile devices and these are both important parts of that story,” Rainie said.