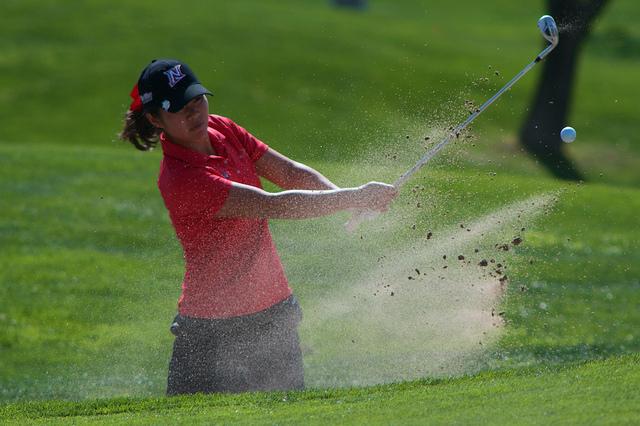 In their first home tournament in six years, the Matadors teed off the spring season with a commanding victory, finishing with a tournament-low 887 strokes. The team hosted the inaugural two-day Matador invitational at the Wood Ranch Golf Club in Simi Valley.

The Matadors opened Tuesday with a 22-stroke lead after logging in the lowest team score in the first two rounds of play Monday with a day-low 284 strokes in the first round, followed by a total of 306 strokes in the second round. CSUN’s momentum continued into day two of the Invitational.

The Matadors ended Tuesday with a total of 297 strokes to finish with an 887 total, 23 over par. The total score was good enough to take run away with the  tournament, as the second-place BYU Cougars finished 36 strokes behind with a total score of 923.

Junior Elisabeth Haavardsholm posted her best career tournament total with rounds of 72-80-73  for a total of 225. It was her first top ten finish, as she tied for sixth with the USC Trojans’ Victoria Morgan. Individually, freshman Ellen Brantberg entered the top-10 for the first time this season as she finished her final round shooting a season-low 75 contributing to her tournament total of 229.

Head coach Gina Umeck was proud of her team’s performance, the Matadors’ first tournament win since capturing the CSUB Invitational on March 26 of last year.

“Each of them has taken a step forward with what has been challenging them,” Umeck told Go Matadors.  “When that happens you get great performances like this and I feel fortunate to be a part of this groundbreaking year for CSUN.”

Although they hosted a spring invitational in 2008 at the Tierra Rejada Golf Club in Moorpark, the Matadors had not hosted an event since.  CSUN will look to host the Matador Invitational and Big West conference rivals annually.

The Matadors do not tee off in tournament play until Mar. 3 when they step on the green at the Bruin/Wave invitational at El Caballero Country Club in Tarzana. The Matadors will look to repeat their stellar performance in a field of 17 West Coast teams including seven top-25 teams, including all four former champions and the top two teams in the nation, regional rivals UCLA and USC.