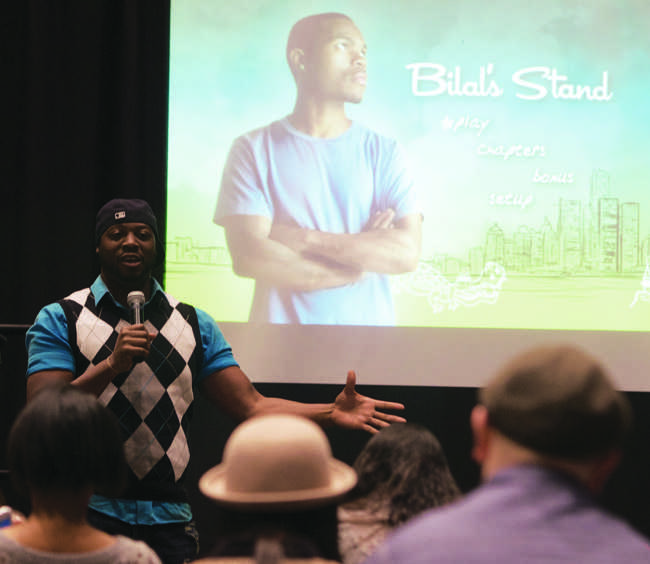 Writer/director Sultan Sharrief talks about the difficulty of getting his film financed to a crowded room at the Northridge Center. "Bilal's Stand" was presented as one of the offerings for Black History Month.

The Civil Discourse and Social Change Initiative (CDSC) presented a movie that dealt with poverty, religion and social mobility.

The movie, “Bilal’s Stand,” was presented to a crowd in the Northridge Center. It deals with themes that many CSUN students can relate to such as community abandonment and being the first to attend college.

“Bilal’s Stand” is about an impoverished African American male that just got into the University of Michigan, but doesn’t have enough money to attend, and isn’t getting the emotional support he needs from his family and friends.

In an effort to get the financial issue resolved, he applies for a $12,000 loan, but tuition is $15,000. In order to come up with the rest of the money, Bilal takes an ice sculpting class so he can compete in an ice sculpting competition for a scholarship to win enough money to attend the University of Michigan.

Bilal struggles with convincing his family and friends, especially his mother and his close friend, that he’s not abandoning them and he’s not boujie, or thinks he’s better.

Director Sultan Sharrief said, “We didn’t have enough money to finish the film [and we sat down and discussed] should we go ahead and try to shoot even though we don’t know if we’ll be able to make it through, or do we shoot a shorter version?”

Sharrief went ahead and shot the entire film, but because there wasn’t a larger budget he couldn’t go back and look at what he shot, so he ended up shooting the film blind and hoped the scenes came out right.

“Some of the scenes were shot two to three years apart (because of budget issues),” he said.

His team felt like they needed to go through those challenges to create the movie because they wanted to give those high school students a chance to explain themselves through the film. The movie premiered at the Sundance Film Festival in 2010.

The struggles that Bilal faces are struggles that Sharrief faced during that time in his life. He had to deal with people telling him he couldn’t make it to the University of Michigan, there wasn’t enough money and he thought he was better than everyone else.

Sharrief did end up making it to the University of Michigan. He majored in film and made his first film at the age of 19 which was called, ‘The Spiral Project’. It was later nominated for an MTV Movie Award.

A few years after ‘The Spiral Project’ Sharrief started a program called Encouraging the Filmmaking EXperience; the program teaches art through film to inner-city kids. Sharrief was also the director and producer of the film ‘The Flow’, and executive producer of Taffy, Cigarettes.

Bilal’s Stand was shown in honor of Jusdeep Sethi, one of the main organizers of Hip-Hop Think Tank who believed in civil discourse and social change. Sethi died in August 2013 at the age of 20.