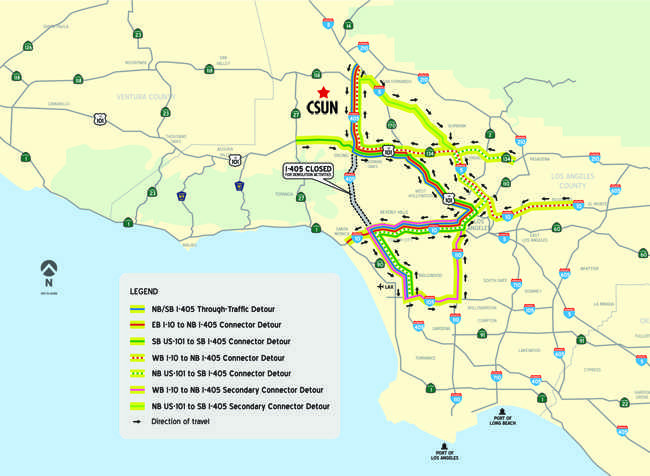 Students will soon face the wrath of the traffic-induced hysteria that takes over Los Angeles when an approximate six-mile block of the 405 is almost completely restrained from vehicular access for more than three days.

“Jamzilla,” the name dubbed for the 80-hour closure of the northbound 405 highway, will take place over the President’s Day weekend. However, the son of the infamous “Carmageddon” traffic jam will not be as severe as its predecessor.

Lanes will close starting at 7 p.m. on Friday, Feb. 14, and will continue with day and night disruption until early Tuesday morning.

The closure will not be a permanent lane blockage of the northbound highway. During the day, three of the five lanes will be closed. However, come nighttime, all lanes will be permanently closed for construction purposes.

Metro workers will construct a high-occupancy vehicle (HOV) lane during the I-405 lane closures.

“This will be the last major closure and it will enable us to get the project done in a small amount of time,” Sotero said.

Unfortunately, those looking to travel farther down the 405 may have to think twice before making the trip, as Sotero and authorities have warned LA residents of severe lane congestion.

Sandy Gallardo, a 23-year-old health administration major, was thinking of visiting her family in Inglewood over President’s day weekend.

“I might just have to take a rain check on that,” Gallardo said.  Like Gallardo, other students could face the same traffic dilemma for the weekend.

Los Angeles motorists will be obligated to seek different means of travel and will possibly be forced to stay away from the 5.6-mile block from Getty Center Dr. to Ventura Blvd.

Luckily, Metro has detailed a series of detours on their webpage for all motorists to take if attempting to go to any surrounding areas of the blockage.

Other forms of transportation are available for those looking to get out of the valley for the weekend, without having to sit alongside other motorists for hours at a time.

Metro buses are available for for travel with a variety of routes for those wanting to visit the Getty Museum can get there in a two to three hour travel time from almost anywhere in the Los Angeles area.

While the weekend might be of concern to many Northridge residents, others might be more concerned with their travel to the San Fernando Valley.

According to a 2010 report released by the Institute for Sustainability of CSUN, 95 percent of CSUN faculty, staff and students commute to the campus. Come Saturday and Monday, commuters will face longer-than-usual traffic.

Rebeca Hernandez, 22, a recent CSUN graduate in liberal studies, is currently undergoing her accreditation process on campus to become a schoolteacher. However, unlike Gallardo’s situation, Hernandez lives in Hawthorne and commutes twice a week to Northridge.

“Monday will possibly be a really bad day for a lot of people, like me,” Hernandez said.

Sotero proposed for those looking to travel to the Valley or farther north than the Sepulveda Pass to completely avoid the blocked area and look into other highways for better travel times.

Confident that a little unusual traffic will not drastically change her day, Hernandez predicts the same for many other LA residents who are used to these catastrophes.

“It’s nothing we haven’t seen before,” Hernandez said.