Love and technology: the double-edged sword 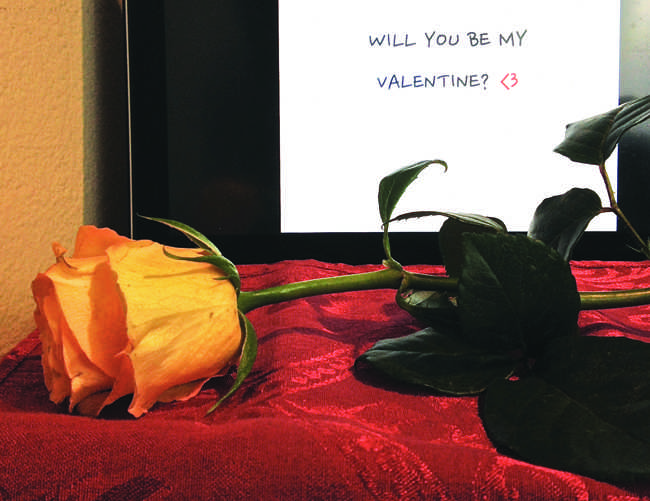 We’re living in a time when cell phones and other technological gadgets are considered a necessity. College students, working parents and even the out-of-touch grandparents have ascribed to today’s technology driven culture and often suffer from withdrawal when separated from their phones for any length of time.

Living in the technology-filled world that we have today, it’s hard to look back on the old days when cell phones had visible antennas, dial-up internet was common, texting was not an option, tweeting was not yet invented and relationships were a lot simpler.

The Merriam-Webster Dictionary defines love as “a feeling of strong or constant affection for a person.” It still is very true, yet technology has made love much more complicated. Ninety-one percent of American adults have a cell phone and are using it for more than just a phone call or text, according to research done by Maeve Duggan called “Cell Phone Activities 2013.”

Finding someone to go on a date with in the past would generally require a person to meet someone and interact physically at a place like a coffee shop, in a class or at the gym. It still is the way people continue to meet and develop relationships, but with technology it is a requirement anymore.

“In my opinion the world of technology is a wonderful thing in terms of people meeting online and disseminating information and giving people a sense of community,” said Marc Hamer, romantic love specialist and member of the Department of Psychology.

While Hamer is in favor of technology helping people find their significant others, he understands that it comes with a price in the sense that there is a personal connection lost between the couple.

“It’s the difference between sitting across the table on a first date and chatting over the internet,” Hamer said. “It’s a form of communication which lacks the interpersonal, so with technology the danger that we have is losing the interpersonal, it’s a double-edged sword like everything else.”

Technology has brought online dating into the love-finding journey and it is something that is gaining popularity. Researchers Aaron Smith and Maeve Duggan of the Pew Research Center on online dating and relationships shows that a growing number of people look at online dating more positively than in the past.

Junior Kimberly Sanchez, majoring in psychology, doesn’t use online dating herself, but she does see why some would.

“There might be people on there that are not as social and need online dating to be able to meet a person and get comfortable before meeting face to face,” Sanchez said.

Online dating is on the rise, but it has received some negativity. According to the research by Smith and Duggan, 21 percent of internet users have looked at those who have used online dating sites as desperate. Meeting people online has taken away some of the fun and normality of going out and experiencing face-to-face communication, but it is working for some.

About six percent of people who use the Internet and are in a committed relationship have met their partners online, according to Smith and Duggan’s research. With many online dating sites gaining popularity through word-of-mouth and through advertising, it will not be a shock to see the number of people participating in them rise.

Maintaining a relationship requires both partners to put forth a lot of effort, especially when it comes to communication. When phones became a societal norm, it was exciting and brought new ways of communicating.

Text messaging, the capability to text a significant other about their day, sexting or sending pictures has become one of the more popular ways to stay in touch. Dugan found in her research that 81 percent of cell phone owners use texting.

Although texting a partner has taken out some of the intimacy in a relationship, it is a way of communicating that many find convenient. Sophomore civil engineering major Janella Tobar is one of many that believes texting is convenient, as she said that she and her boyfriend of almost two years use it to communicate throughout the day.

“I text my boyfriend more often unless a text can’t wait, then I call him. I think texting is just easier when we’re not together, whether I’m at work or he’s at work. It’s just easier,” said Tobar.

Texting is a lot more common among the college-educated and young adults according to Duggan’s research. Having school, work and internships definitely keeps a college student busy. Technology such as texting has allowed people to multitask, doing their jobs and keeping in touch with their significant other.

Facebook, Twitter, Instagram and many other social media platforms are used by people all over the world. We share information about our lives and basically everyone and anyone can see it. If you are in a relationship, where you went on a date last night or what you will be doing tomorrow is information people generally share.

Couples often share a picture or even a collage of the wonderful day they spent at Disneyland or some romantic place on Valentine’s Day. Tobar shared her thoughts on social media as well.

“I do like things like Instagram because I can post cute stuff and memories we have, but at the same time, my boyfriend’s more private so putting our stuff out there is not always the best.”

There is also the problem that social media allows people to make a lot of information public that people might prefer to keep within their relationship. Junior psychology major Kimberly Sanchez believes social media has definitely changed love with everything we use on the internet.

“A relationship should be more about spending time with the person, not sharing pictures letting people say what they think about the relationship,” said Sanchez.

With social media, many do not realize the privacy they are giving up. According to a study by Kathryn Zichuhr called “Location Based Service,” there is a big jump in the number of people using social media and having their accounts show their location in a post. The study states that “among adult social media users ages 18 and older, 30 percent say that at least one of their accounts is currently set up to include their location.” Zichuhr found that the number has gone up to 14 percent since 2011.

Technology has made its presence in both good and bad ways when it comes to love. Social media has allowed users to constantly update their lives. It has brought society texting, which has somewhat altered the intimacy felt between couples and it has made trust in a relationship a lot more difficult.

Carolina Escobedo, senior psychology major, strongly believes that technology has made it much easier to cheat but it is also easier to catch people in the act as well.

“I have seen guys with girlfriends talking and flirting with other girls on social media and it’s just sad. I don’t understand why people cheat. If you want to mess around, just remain single,” said Escobedo.

Settings such as location based services might not seem like a big deal, but when someone is trying to look for signs of cheating, it will be a big clue about whether someone was lying about their whereabouts based on a post shown.

Other features on applications like Snapchat, which has become very popular, can also be a tool used to cheat. The application allows you to send pictures or videos to other users for a limited amount of seconds.The application also displays a person’s “favorites,” referring to the person a user sends the most snapchats to. If someone were to look at his or her girlfriend/boyfriends’ favorites for example, it could show whether he/she was snap-chatting someone they should not be.

Technology has modernized the way couples communicate with each other, but it also develops plenty of issues.

William Arriola, junior mechanical engineering major, met his girlfriend at CSUN. They’ve been together for three years and the trust in their relationship is strong enough to not have technology get in the way.

“We have established enough trust in our relationship to not have to worry about things such as who we are texting or who sent us a message over social media,” Arroila said. “We both have come to the point that we know our actions are what speak the truth and mean more in the end.”

As Valentine’s Day is celebrated, technology will in many cases be a part of it, and hopefully with the right intentions. Go ahead and post a picture on Instagram of, or with, the special someone you will be sharing the day with.

Maybe Snapchat your close friends a picture of where your date took you, or perhaps choose to spend the day focusing on your partner and challenge yourself to avoid letting technology get in the way for just one day.