405 freeway will close for four days during ‘Jamzilla’ 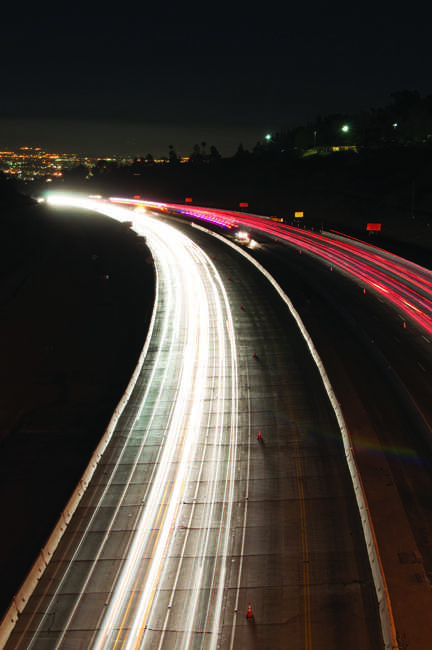 Traffic on the 405 taken at night before lane closures by the Skirball Center on Wednesday, Feb. 12, 2014 in Los Angeles,Calif. (Photo Credit: David J. Hawkins / Photo Editor)

Valentine’s or Presidents’ Day weekend commuters may have a little trouble getting to their loved ones.

The northbound 405 freeway will experience an 80-hour closure starting at 10 p.m. on Feb. 14 and ending at 6 a.m. Feb. 18 due to the Sepulveda Pass Improvements Project, which involves the installation of a high-occupancy vehicle (HOV) lane on Sepulveda pass, according to the Metro website on the project.

Steven Chong, 21, junior economics major, is deciding whether to take either the 101 or the 5 freeways to get around the closure, instead of Sepulveda Boulevard, to escape the potential traffic jam.

“Although the closure will not affect my original plans on Valentine’s Day, it will affect my commute back home longer than I would usually take,” Chong said. “It will also make all routes to get to Los Angeles congested with vehicles dramatically.”

The closure, nicknamed Jamzilla, will be the third time in the past three years the 405 has been partially or completely closed, following Carmageddon I in July 2011 and Carmageddon II in September 2012.

“The first two closures of the I-405 were necessary because it was impossible to safely demolish the old Mulholland Bridge while keeping the freeway open to traffic,” said K.N. Murthy, Metro executive director of transit project delivery. “The pavement work cannot be done while traffic is flowing on the road.”

“I remembered all the radio coverage on Carmageddon when they shut down the entire freeway over a weekend,” Rehard said. “It was ridiculous.”

Chong said the 405 closure in September 2012 didn’t have a great impact on him because he used the 10 freeway get around during the closure.

The Sepulveda Pass project requires that the workers repave parts of the HOV lane, which is why drivers will experience delays. The lengthy closure is necessary in order to finish the entirety of the project on schedule, according to the website.

Murthy said the closure will save plenty of time because Metro doesn’t have to close and open the construction area to traffic, making their operation  more effective and efficient.

“With the area closed, we can stage more of our heavy equipment near the work area,” Murthy said. “We are also freed from doing temporary striping and paving.”

To advance the operation efficiency, the closure will include a partial lane reduction during daytime hours and a complete closure of the freeway’s northbound lanes between Ventura Boulevard and Getty Center Drive at night, according to the website.

Ronald Flores, 28, senior psychology major, recently got a new job in Glendale. He starts working this weekend, and will have to commute from Northridge during Jamzilla.

Flores feels it is too early to tell whether or not the closure will greatly affect his commute.

“I am not sure that the 405 closure will affect me greatly since I’m not used to driving there yet, but I imagine there will be increased traffic on the way there,” said Flores.

The Metro website also stated the freeway being closed for 80 hours this coming weekend will make it possible to eliminate many previously scheduled, 55-hour freeway closures from the project schedule.

Jonathan Arbino, 23, senior art major, suggested Metro should opt for one extended freeway closure complete the pavement project instead of closing it periodically.

Arbino feels he has figured out how to avoid the traffic during the times when the freeway will be closed.

“I will plan to commute at night and go back home late this weekend because fewer people are on the road,” Arbino said.

Metro operations will be monitoring traffic flow during the weekend if necessary, Murthy said.

The closure is about 5.6 miles, two-thirds of the length of the entire  405 project.

“Our first obligation is always safety for both motorists and our construction workers,” Murthy said.

Adrienne Knapp, 22, senior english literature major, said she prefers to stay home instead of meeting with her friends this weekend because of the freeway delays.

“I will avoid driving on the I-405 until next Tuesday when I have to go to school,” Knapp said.

“I will go to school on Tuesday, and I hope the sections of the closure will reopen on schedule. But just in case it’s not, I will have to leave early in the morning to be on time to class.”

“In the past closures, we found that notifying the public ahead of time and asking them to avoid the area worked, and we were largely able to avoid gridlock in the area,” Murthy said. “Let’s do it again this time.”