Men’s Basketball: Men drop in standings with loss at home to Cal Poly 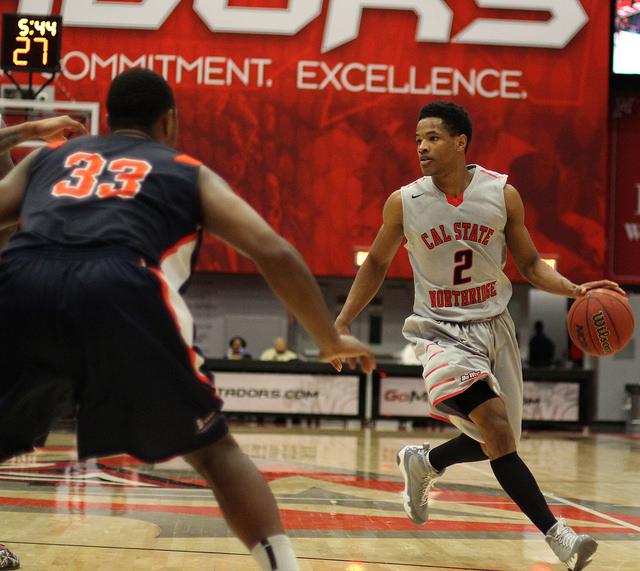 In a physical play-from-behind game CSUN could not find the opportunities to outscore Cal Poly in an important Big West game in which both teams are battling for birth in the upcoming conference Tournament.

Junior forward Stephen Maxwell recorded a game-high 18 points. Yet after scoring first and jumping ahead early, Cal Poly led the entire game. They continued to control, logging a halftime score of 31-25. Senior forward Chris Eversley was the Mustang’s top scorer with 17 points. He also came down with 13 rebounds.

CSUN never let the game get too far away, as Cal Poly’s lead never exceeded nine points.  A late game tip in by Greene would have tied the game at 57 with two minutes to play but he was called for offensive interference. The Matadors were unable to answer after the penalty and another five point run by the Mustangs sealed their win.

During the halftime festivities the jersey number 58 was retired in order to honor the years of athletic support and scholastic service by CSUN faculty since the university’s founding in 1958. This marks the first time a number has been retired in school history. No other student athlete will be able to don the number in play.

Athletic Director Dr. Brandon Martin stated that the halftime ceremony marked “one of the best days as a Matador.”

“This is a big tribute for our faculty for nearly 60 years of service and for supporting our athletic program during a time of challenge and prosperity,” Martin said. “For me this is a historic day for our university regardless of the final score tonight. We all leave the Matadome tonight as champions knowing that we have a body of faculty committed to teaching and inspiring students for years to come.”

With this loss CSUN falls to sixth in the Big West Conference while Cal Poly rises just above the Matadors to fifth in the standings.

CSUN heads north to step back on the court Saturday afternoon against the first-place UC Santa Barbara Gauchos (16-6, 7-2). Tip off is at 4:00 p.m.