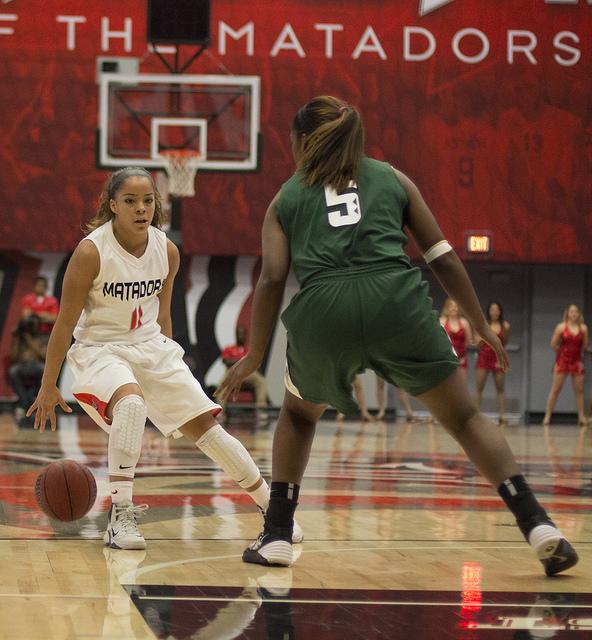 With solid offense that kept the Mustangs trailing throughout the game, the Matadors broke the conference leader’s streak, handing them their first loss since Jan. 16, when CSUN defeated the Mustangs at the Matadome.

Landing the first shot off the tip-off, the Matadors went on a 16 point run in the first part of the second half before Cal Poly managed to break the streak with a free throw by senior center Molly Schlemer to bring the score to 24-7 at the 13:18 mark of the first half.

The Matadors, with hot shooting from junior guards Ashlee Guay and Cinnamon Lister, would take a twenty point lead over the Mustangs and close the half 54-29, with three shooters reaching double digits. Lister wrapped up the half with 20 points, followed by Guay who had 17 and junior guard Janae Sharpe with 12 points.

Coming into the second half CSUN would widen their lead to 30 points, but Cal Poly would play solid defense for the first part of the second half and manage a 13-0 run over Cal State Northridge to bring the score to 61-44 before their defense broke.

As the half winded down the Matadors would make good off of steals and turnovers by Cal Poly, taking a 20-point lead with 4:42 left in the game.

CSUN would go to take the game with little retaliation from Cal Poly who landed one point from a free throw in the last five minutes of the game.

The Matador offense shined on the stat sheet with a shooting average of 47.8 percent, with 88.9 percent free throw shooting and 44 percent in threes.

CSUN guard Ashlee Guay, who leads conference in total points scored with 201, and stands third in season for field goals made, knocked down four 3-pointers for a total of 20 points against Cal Poly.

Matadors junior center Camille Mahlknecht, who stands fourth in the Big West in rebounds and leads her team in blocks, proved the solid defender once again, with six blocks and seven defensive rebounds against the Mustangs.

With 47 rebounds that proved ineffective at putting points on the board, Cal Poly suffered with 18 turnovers and seven steals by Cal State Northridge. The Mustang’s ineffective offense showed on the stat sheet with a 31.7 percent shooting percentage and a 22.2 percent 3-point average with only two landed by Cal Poly for the game.

Despite Northridge’s victory Thursday, they still sit behind Cal Poly as conference leader, who has a higher winning percentage with one less loss in conference play. Cal State Northridge is tailed by the University of Hawaii Rainbow Wahine (12-10, 6-4 Big West), who defeated UC Riverside 67-54 Thursday.

The Matadors return home Saturday to face the UC Santa Barbara Gauchos (7-15, 2-7 Big West), who took an earlier conference lost Jan 18 against CSUN 64-46.  The Gauchos are coming off of a win 80-69 from Long Beach State Thursday.

Cal Poly is scheduled to play the Long Beach State 49ers (13-11, 5-5 Big West) Feb. 15. With a Mustang loss and Matador win, CSUN can gain sole possession of first place in the conference.