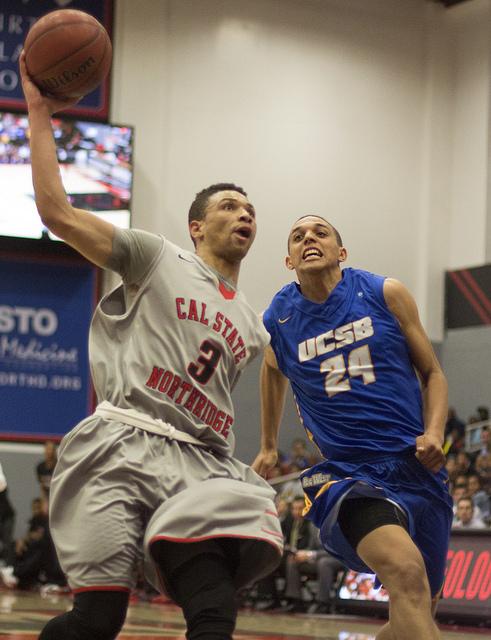 Cal State Northridge had lost to the Gauchos in the first meeting between the two teams earlier in the season, but the Matadors put up a fight to run away with the win in their second meeting.

Junior forward Stephen Maxwell would seal the win for the Matadors after hitting a jumper with just .01 seconds remaining in the game.

Senior guard Josh Greene led the Matadors in scoring finishing with 23 points along with four assists and two steals while Maxwell recorded a double-double with 17 points and 12 rebounds.

CSUN had a tough time scoring early, coming up empty in their first nine field goals as they went scoreless for the first six minutes of the game. The Matadors finally got on the scoreboard after a jump shot by Maxwell connected, bringing the score to 9-2.

After falling behind, the Matadors fought back going on an 8-0 run to cut the Gauchos’ lead to just one point. UC Santa Barbara led for the majority of the first half hitting their free throws, but it was the Matadors who would finish the half on top.

The Matadors took their first lead of the game after Greene knocked down a 3-pointer to give the Matadors a  21-20 lead with 6:13 remaining in the half. Vozzola caught fire, hitting all three of his 3-point attempts including one with just five seconds left, putting CSUN in front 35-33 at the half.

UC Santa Barbara would come out in the second half to take the lead with strong play coming from sophomore forward Taran Brown, who scored seven quick points to put the Gauchos ahead 47-41 with 15:49 left in the game.

Northridge would go on a 10-2 run and tie the game at 57 with 6:33 remaining after a 3-pointer by Vozzola.  The Gauchos countered with a 6-0 run of their own, but the Matadors would stay in the game and send the game to overtime with a layup from sophomore guard Landon Drew, tying the game at 71 apiece.

In overtime, the teams went neck and neck with five lead changes. Junior guard Zalmico Harmon, who finished the game with 21 points and 8 assists, knocked down a jumper to give the Gauchos their last lead of the game at 78-77 with 2:07 left in the game.

Maxwell would prove to be the hero for the Matadors with a crucial steal, a free throw and the game winning shot to end the game at 80-78. Coach Reggie Theus was ecstatic with the overtime win over a tough opponent.

“This was a tough, physical game but we never gave up. I am just so happy for our guys. They play hard every night,” Theus said in an interview with Go Matadors.

The Matadors will finish their road trip with a non-conference game against Idaho (11-16) on Feb 18, before returning home to host the now-first place UC Irvine Anteaters (17-9, 8-2 Big West) on Feb. 22 in a game which will be televised by Fox Sports Prime Ticket.