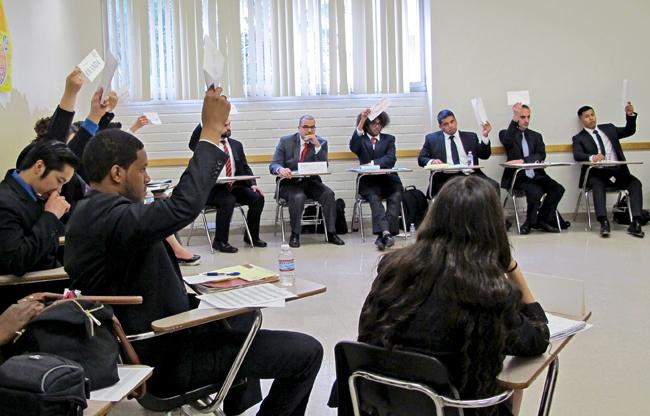 Delegates from nations such as France, Argentina, and People’s Republic of China met in Sierra Hall on Saturday to discuss a crisis between the Central African Republic and the Democratic Republic of Congo. After hours of arguing and debates, the representatives unanimously passed two resolutions that ended the conflict which drew applause from all those present.

The crisis was a simulation and the delegates were political science and Pan-African studies students. They were taking part in the first joint Model United Nations (UN)- Model African Union (AU) Simulation on campus. About 20 students took part in the simulation, which was presented with the help of students from College of the Canyons.

David Horne, Pan-African studies professor, said  he would like to see this happen every year.

“We want to expand the opportunity to train students to become diplomats,” Horne said.

Horne said the field of diplomacy involves negotiation and that these students will be prepared for that.

“You can not solve everything with a gun in your hand,” Horne said.

He called the students in attendance “pioneers” because of the combined simulation.

“You are the future leaders,” Horne said.

Professors from both departments were on hand, but the proceedings were exclusively run by the students.

Sheba Lo, Pan-African studies professor, said the experience for her students will be life changing.

“It’s amazing to watch the transformation of our students,” Lo said.

The simulation acted as training for students in both departments. Pan-African studies students will go to the Model African Union Conference in Washington, DC on February 20 where they will be the only school from California. The political science students will go to the National Model UN Conference in New York City on March 30. There they will compete against other schools from not only the US, but around the world.

For Josh Henderson, junior double majoring in political science and Pan-African studies, the conference was his first time taking part in a Model UN.

“This is one of the most amazing experiences I’ve ever had.” Henderson said.

Henderson will be part of the delegation going to DC.

“It feels like this is something I can do,” he said.

He also said the simulation has been eye-opening.

“I feel like I’m more prepared than I was before,” Henderson said.

“We wanted to do something to increase community involvement,” De Maio said.

De Maio said the combination of Model UN and Model AU was a perfect match.

“It was a natural combination, both programs focus on diplomacy,” De Maio said.

De Maio said the conference was a success in part because of the assistance from the university.

“We got a lot of support from the Dean of College of Social and Behavioral Science and AS,” De Maio said.