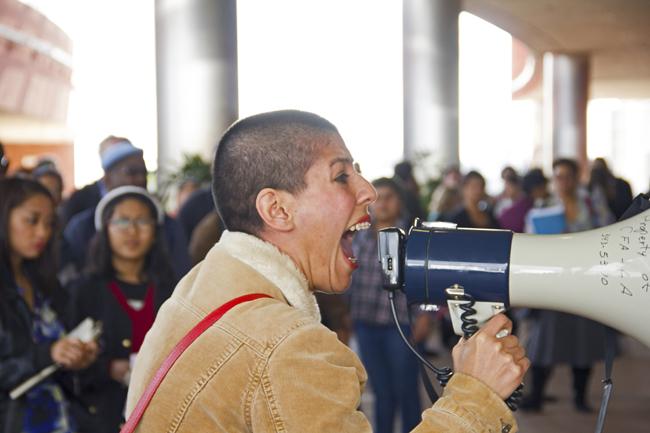 A protest at Cal State LA disrupted the Feb. 4 Academic Senate meeting. Students, faculty and others voiced their concerns about the Senate voting against making sure at least one ethnic studies course is part of the general education requirement. (Photo courtesy of Timmy Truong)

As Cal State Los Angeles students and faculty anxiously await Tuesday’s Academic Senate vote on their proposal to include at least one ethnic studies class as a general education requirement, CSUN faculty have stressed the importance of these courses while expressing appreciation for CSUN’s commitment to providing a diverse education.

The proposal, which was reintroduced on Feb. 11, triggered students, faculty and community supporters to mobilize in protest, resulting in the cancellation of the Feb. 4 Academic Senate meeting after the measure was defeated on Jan. 21 and Jan. 28 by votes of 24-16 and 29-20, respectively.

Melina Abdullah, chair of the CSULA Pan-African studies department, believes the ethnic studies debate at the university stems from a dilution of GE requirements and minimization of classes pertaining to race and ethnicity.

“It’s really important that students receive a counter-narrative to the eurocentric education that’s been a part of their educational process since the K-12 system,” Abdullah said. “We’re trying to present a new knowledge base where they can learn the true history, experiences and cultures of people who aren’t represented as they should be in traditional curricula.”

Johnie Scott, chair of the CSUN Pan-African studies department, agrees with Abdullah that ethnic studies are necessary for providing a more complete education.

“To make it general-education recognized is to say that your experience is part of the national experience, the American experience, the world experience,” Scott said. “You become richer now where you realize this is a diverse society.”

Theresa Montaño, professor of Chicano studies at CSUN, and Scott pointed to changes reflected in the U.S census as evidence that educational material should encompass all the different cultures and ethnicities.

“Given the demographic changes and the history of this country, it should be without question about the importance of looking at ethnic studies,” Montaño said.

“America is not that way anymore and to make it GE is to say our history is just as valid in subject matter as white history,” Scott said, referencing Caucasians transitioning from the majority to the minority.

“Comparative cultures is fairly unique in terms of the GE requirements anywhere because here, ethnic studies are strongly represented,” Neubauer said. “I think the situation at Cal State LA is very different in that the ethnic studies department has little or no GE. On this campus, there has always been a strong commitment to have ethnic studies be part of GE.”

Scott said the commitment to a diverse education is not lost on faculty.

“The very fact GE allows courses to be offered is support,” Scott said.

Montaño agrees CSUN provides greater opportunities for learning about diversity than other institutions, but also remains an interested observer of the events at CSULA.

“We’re looking very closely at Cal State LA to see what actually transpires because we have a more generalist approach to the comparative cultures and what Cal State LA is asking for is quite specific,” Montaño said. “On the surface, it appears to be something we would be supportive of.”

Montaño said there have not been any formally proposed changes or discussions at CSUN in regards to following in the footsteps of CSULA as of yet.

“We’re hoping that senators and Cal State LA as a community would be courageous enough to be the first,” Abdullah said. “We’re hopeful that what we’re doing at Cal State LA if the motion is adopted would be a model so it could be replicated across the system.”

Professors have noted the events surrounding CSULA resemble the struggle CSU students and faculty faced in the formation of ethnic studies, which grew out of joint protests at San Francisco State University in 1968.

“Students and community members began to realize that there was a significant group whose contributions to not only this country, but the world, were overlooked and often distorted and began to question how do become more inclusive when we start to talk about the ‘American experience,’” Montaño said about the formation of ethnic studies.

Abdullah believes the history and struggle to incorporate the discipline, which was born in the CSU system, makes the current locale a perfect fit.

“It’s an opportunity for us to take a stance and embrace our history at the CSU,” Abdullah said. “It makes sense for us to be leaders in cultural competency and intelligence.”