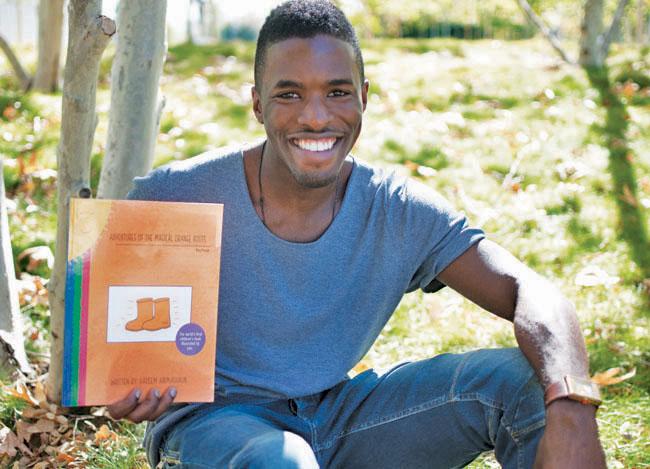 After reading "Where the Wild Things Are," Hakeem Animashaun became inspired to create a children's book where the child could let their imagination roam, and illustrate their own drawings. Photo Credit: David J. Hawkins / Photo Editor

After reading “Where the Wild Things Are,” Hakeem Animashaun became inspired to create a children’s book where the child could let their imagination roam, and illustrate their own drawings.
Photo Credit: David J. Hawkins / Photo Editor

Browsing through a thrift store in Los Angeles before his big move to New York, Hakeem Animashaun, senior marketing major, spotted a pair of bright orange boots which soon became the inspiration for a one-of-a-kind children’s book.

Animashaun took the boots with him to New York where he was studying as an exchange student through a CSUN program. While there, he visited Times Square, Central Park and the Brooklyn Bridge, influencing him to title his travels, Adventures of the Orange Boots. These personal journeys inspired him to name his debut book, “The Adventures of the Magical Orange Boots: The World’s First Children’s Book Illustrated by You.”

“Ever since I read ‘Where the Wild things Are,’ when I was a little kid I just thought, ‘Man, I want to do this when I grow up,’” Animashaun said. “I really wanted to expand a child’s creativity. That was the inspiration behind the book.”

Animashaun started writing the book in 2012, and though it went through multiple stages before being published, it only took him a year to complete it.

The story teaches kids to explore, have wisdom, and gain courage and compassion through the adventures of a seven-year-old-boy named Joey. Joey puts on a pair of magical orange boots and is transported to other countries, allowing him to engage with kids his own age from different cultures.

After putting on the boots, Joey lands in Egypt where he meets a young girl. Soon after befriending the girl, the two are kidnapped by a camel. Through his boots, Joey ends up escaping to China where he meets a dragon whose wise words inspire him to be courageous to go back and save his friend.

The cover, which shows a pair of orange boots enclosed in a white box with the rays of a smirking sun beaming down on the boots, was also designed by Animashaun.

Inside the book, there are large boxes above and below the text where children can draw their own interpretations of the story. Animashaun envisions the book being used in elementary schools, changing the way teachers conduct lessons in class, and how students will learn from it.

Hoping to inspire children to draw, Animashaun explained that this tactic would help children develop their cognitive ability. According to a study by the Dana Foundation, research has shown that practicing an art is just as effective in developing emotional control, cognitive ability and other hobbies.

Though Animashaun admits writing the book was frustrating, he did enjoy the process.

“This is something I’ve never done before, this is my first children’s book,” Animashaun said. “I’ve been working really hard in school and trying to get the word out.”

Not only was the writing process frustrating, but it was difficult for Animashaun to get his work published since he had published the book himself.

“Being self-published can be a good thing and a bad thing,” Animashaun said. “It’s good because I have all the creative powers to do what I want with the book, but the bad part is when I contact other publishers and tell them it’s self-published, I could lose credibility because anyone can self-publish their ideas.”

Animashaun hopes to see his book being used as an educational tool in schools around the world to assist children in their creative and cognitive development.

“Being the first of its kind, I know people may not want to accept it, but if people just give it a chance they’ll see that this is an amazing concept and this can change the way kids learn,” Animashaun said.

Since the book assists in developing cognitive ability, adults can also use the book to enhance their own as well. “I’ve actually written a couple passages for part two of the book and also hope to make an adult version as well,” Animashaun said.

In addition to having children create their own illustrations, Animashaun has set up an email account where kids can submit scans or photographs of their drawings to be placed on his blog.

“That’s going to build a whole community around the book,” Animashaun said. “I’m trying to break the mold of traditional thinking with this book. There’s always been pictures that push the illustrators vision of the character, I figured I’d just let people illustrate that on paper.”

“The Adventures of the Magical Orange Boots,” is available through Amazon and other major retailers.