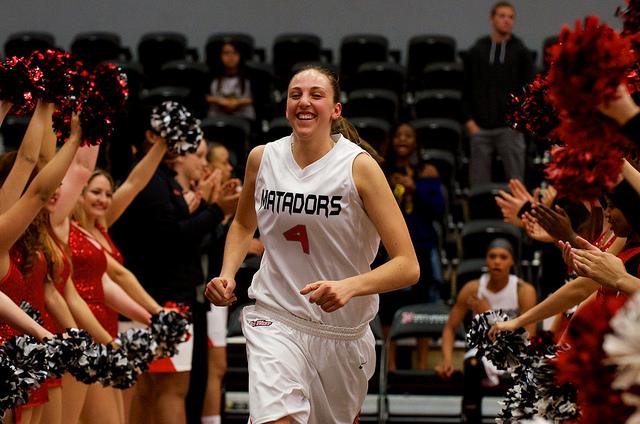 Following one of the best games of her career on Saturday, junior center Camille Mahlknecht was awarded with Big West Player of the Week honors Monday.

Mahlknecht led the Matadors to a 78-54 blowout win over the UC Santa Barbara Gauchos on Saturday with a season-high 21 points and a career-high and Matador record 22 rebounds.  On Thursday, she rejected six shots and grabbed seven rebounds in a 83-57 rout of the then-first place Cal Poly Mustangs.

“It feels great (to set a record)” Mahlknecht said following the victory over UCSB on Saturday. “The win’s the most important thing, but I’m glad to have an extra bonus. I’m just glad we got the win.”

The Big West leader in blocks per game by nearly two (3.1) has averaged 5.2 blocks per game in February, leading CSUN to a 4-1 record and first place in the Big West.  Mahlknecht is tied for tenth in the nation with 81 total blocks on the season.

Mahlknecht has dominated opponents in the paint, securing 9.2 rebounds per game in Big West play and shooting 53.7 percent, good for third in the conference.

“I am extremely happy for Camille for having earned this recognition,” said head coach Jason Flowers in an interview with Go Matadors.  “We are looking forward to her continuing to improve as we get closer to the postseason.”

Mahlknecht joins teammates junior guards Ashlee Guay and Janae Sharpe in Matadors earning Big West Player of the Week honors, as a CSUN player has won the award in three of the past four weeks.

The Matadors will return to the court on Feb. 22, when they travel to face the UC Irvine Anteaters (12-12, 5-5 Big West) in a game which will be televised on ESPN3.  The Anteaters shut down Mahlknecht on Jan. 16, holding her to a single point in an 83-73 victory at the Matadome.