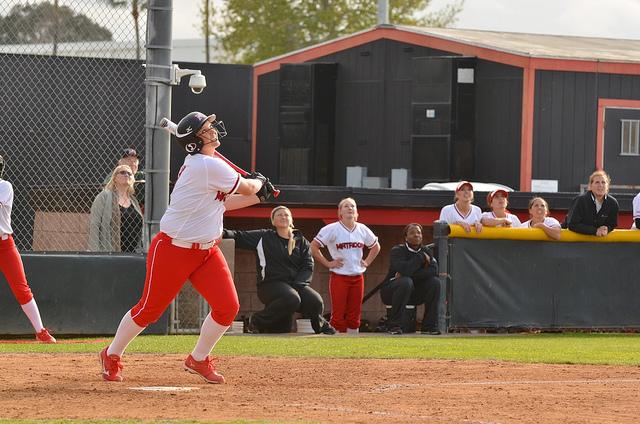 The Matadors (5-5) suffered three crushing losses in the Easton Desert Tournament this weekend, but salvaged the weekend with two victories.

The Matadors’ weekend in Las Vegas was highlighted by a 12-2 victory against the Boise State Broncos (4-6) Friday. Freshman Katie Hooper hit two home runs in the rout, and became only the 28th Matador to do so in CSUN history.

Freshman outfielder Abby Linn also saw the ball well with her four runs against the Broncos. Linn hit her first career triple and contributed three hits for the Matadors.

Junior pitcher Brianna Elder received her third win of the season in five innings of work. This was CSUN’s first time ever beating Boise State.

The team could not carry their offensive attack into their next matchup against the Ohio State Buckeyes (4-6) as they were shut out 9-0 Friday night.

The Buckeyes started hot with two runs in the first and second inning. The Matadors did not fare any better the rest of the game, as five runs were given up in the fifth inning.

Saturday morning’s outcome was not any better for the Matadors, as The no. 1 Florida Gators (11-0) defeated the Matadors 6-0. Elder gave up two solo home runs in the fifth and sixth inning, as she took her first loss of the season.

Freshman outfielder Taylor Glover hit a single down the right line to bring junior outfielder Kaitlin Toerner in for the winning run.

Elder (4-1) pitched the final 4.1 innings with 3 strikeouts and 5 earned runs, and she earned a win.

Glover secured the only Matadors’ run after a double by Taylor Nate. Glover is batting .412 with nine hits in her first season.

The Matadors next five match ups will be in Cathedral City, Calif. for the Mary Nutter Classic.