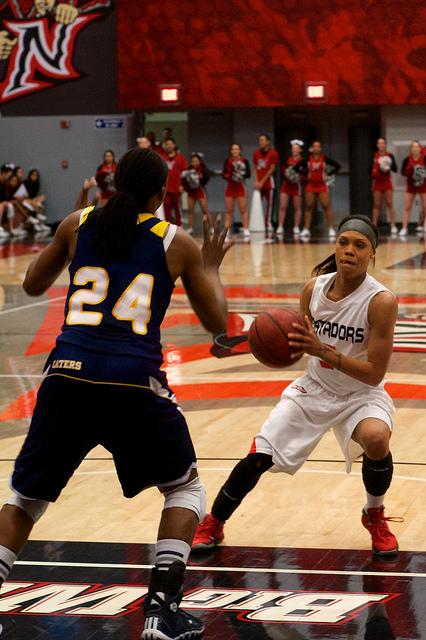 The Matadors (13-14, 9-4 Big West) managed to hold on to their first place conference standing despite being unable to land key shots in a 76-72 loss against the UC Irvine Anteaters (13-13, 6-6 Big West) at the Bren Events Center Saturday.

CSUN slightly trailed Irvine most of the game, unable to overcome the Anteaters’ lead, and took a second conference loss this season to an Irvine team that ended CSUN’s three-game winning streak.

Taking the tipoff, the Anteaters’ senior forward and game-high scorer Camille Buckley landed a jump shot within the first minute, establishing a lead at the beginning of the half for Irvine that they would later exchange with the Matadors.

With a 3-pointer from CSUN’s junior guard Ashlee Guay that was shortly followed by a layup from fellow junior guard Randi Friess, the Matadors traded shots with the Anteaters, taking a lead at the 12:49 mark in the half at 18-17.

The Matadors were unable to hold their lead over Irvine and chased the Anteaters in the second half as they finished the first 20 minutes trailing 38-37.

Buckley opened the second half with a free throw and the Anteaters managed a 9-2 run before the Matador’s junior guard Cinnamon Lister countered with a 3-pointer to bring the deficit to 47-42 with 16:29 left in the game.

Lister landed a 3-pointer with an assist from junior guard Janae Sharpe with 55 seconds left in the half that would bring the Matador’s within two points of Irvine at 74-72, but they were unable to land shots against Anteaters in the final seconds.

The Matadors led Irvine in rebounds and blocks, but gave up more turnovers. CSUN closed the game shooting 40.6 percent from the field compared to Irvine’s 46.4 percent

CSUN’s Friess and Sharpe each secured eight rebounds for the game and were followed by junior center Camille Mahlknecht who had five rebounds and four blocks. Mahlknecht leads in blocks per game in  conference play and stands in the top-15 shot blockers in Division I.

Leading her team with 20 points, Guay landed five 3-pointers against Irvine, followed by fellow guards Lister and Sharpe who each scored 15 points for the game.

Buckley, who led the game with 16 rebounds, has surpassed CSUN’s Guay in conference play with 245 points and sits second overall in points. Guay, who leads the Matadors in points, has scored 238 and is fourth in conference.

Having beaten the Mustangs twice in conference play, the Matadors hold a tiebreaker over Cal Poly.

CSUN is scheduled to play the Cal State Fullerton Titans (10-15, 6-6 Big West) Feb. 27 at the Matadome in their penultimate home game. The Matadors defeated the Titans on Feb. 8 76-54 at Fullerton.

CSUN has three games until the Big West Conference Tournament at Long Beach State’s Walter Pyramid March 11.  If CSUN finishes Big West play in first or second, it will have a bye and play in the semifinals on March 14 at the Honda Center in Anaheim.