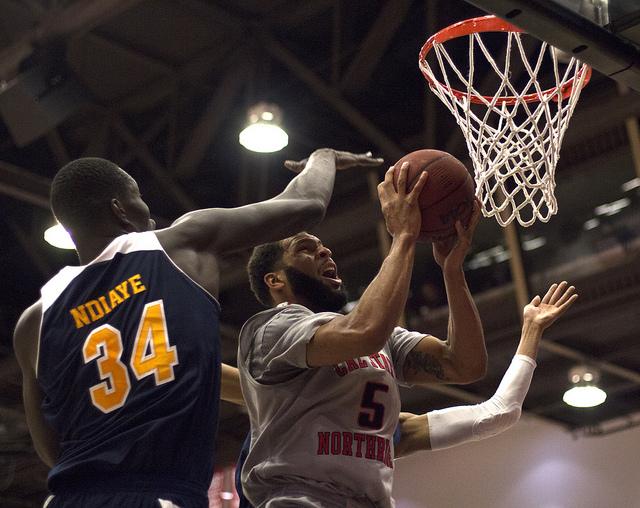 The Matadors (14-15, 6-7 Big West) have had a strong home record all season, and the home court advantage continued with an 81-75 victory over the UC Irvine Anteaters(18-10, 9-3 Big West Conference) at the Matadome on Saturday.

With a crowded Matadome behind them, they came out firing on all cylinders as they upset the first place Anteaters in their second straight conference win over the first place team. The Matadors had defeated the then-first place UCSB Gauchos (18-7, 9-3 Big West) 80-78 in overtime at Santa Barbara last Saturday.

The Matadors came out very physical in the first half which helped them keep the lead in a back-and-forth battle. Junior forward Stephen Maxwell led the charge for CSUN, snagging eight rebounds to go with his game-high 20 points.

Northridge’s physical play caused UC Irvine to get into foul trouble, as the Anteaters committed 16 personal fouls in the first half of the game.  Irvine’s standout 7-foot-6 center, freshman Mamadou Ndiaye had foul problems throughout the game and was limited in his impact on the game with just three rebounds, two points and one block.

The Matadors capitalized on their opportunities on the line, as the nation’s fourth-best free throw shooting team made 38 of 43 free throws on the night including 20 of 23 in the second half.

Senior guard Josh Greene was at the helm of an impressive comeback, with 17 points and six assists. Greene went a perfect 11 of 11 from the charity stripe.

CSUN started strong, jumping to an early lead and maintaining it throughout the first half. Junior forward Stephen Maxwell sank a pair of free throws at the 4:34 mark of the first half to give CSUN a 31-23 lead.

However, Irvine rallied and went on a 13-4 run toward the end of the half.  Junior guard Travis Souza knocked down a 3-pointer with 1:01 left in the half to put the Anteaters up 36-35.  Greene would draw a foul and knock down a pair of free throws with 37 seconds remaining to cement CSUN’s 37-36 halftime lead, but the Anteaters had erased their deficit.

Irvine came out strong in the second half and built a 16 point lead. Freshman guard Luke Nelson made four 3-pointers to help create separation for his team.  Nelson hit a 3-pointer with 9:26 left that pushed the Anteaters’ lead to 68-52, their largest lead of the second half.

The Matadors responded big with turnovers, rebounds and strong play from junior guard Ben Vozzola, who knocked down three big shots down the stretch.

“I’m hard on Ben Vozzola,” said head coach Reggie Theus in a postgame interview with Fox Sports Prime Ticket.  “But, when you’re hard on a guy, and he can come in and knock down shots, that helps us.”

Vozzola helped lead the Matadors in their win over UCSB last Saturday with 17 points off the bench and timely 3-pointers.

Physicality worked in CSUN’s favor as the Anteaters’ Ndiaye and senior guard Chris McNealy both fouled out, removing Irvine’s top shot blocker and top 3-point shooter for the remainder of the second half.

“Down the stretch, we did what we had to do defensively and offensively,” Theus said.  “We took the ball to the hole.”

Irvine failed to score in the final 4:29 of the game, with their final basket coming off of a McNealy 3-pointer to extend Irvine’s lead to ten before the CSUN comeback.

McNealy and Ndiaye’s fifth personal fouls gave CSUN the lead, as sophomore forward Tre Hale-Edmerson knocked down the game-tying free throws and Maxwell sank two more to put the Matadors up for good, 77-75.

Junior guard Stephen Hicks, who finished with 16 points and six rebounds, would pad the lead with a pair of free throws in the final seconds and Irvine would miss three shots and commit a costly turnover with 49 seconds left to clinch the victory for CSUN.

The Matadors will play its final road games this weekend as they travel to play the Cal State Fullerton Titans (9-17, 4-8 Big West) on Thursday and the UC Riverside Highlanders (8-19, 3-10 Big West) on Saturday.