CSUN student raises awareness on the importance of organ donations 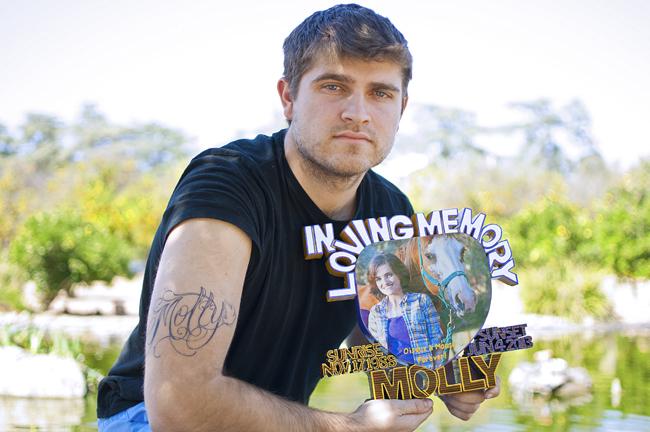 She lived a mere 24 years, with over 180 hospitalizations, 37 operations and died on June 4, 2013 in her husband’s arms in the hospital waiting for a four-organ transplant. The couple had only been married three days.

Her name was Molly Pearce-Eaker. She was diagnosed at birth with a disorder called Hirschsprung’s Disease that obstructs the small and large intestine, making it impossible for them to function properly, according to her husband, Corey Eaker, 25, CSUN student majoring in geography.

“She had such an appreciation for life and just a love for anything,” Eaker said. “If she felt good, she was outside. She never took that moment for granted. She showed me to appreciate my life and try to do as much as I can.”

Molly is not alone. Eighteen people a day will lose their battle waiting for a transplant, according to donatelife.net, a website that provides information about organ donation. There are approximately over 120,000 men, women and children on the waiting list in the United States.

An organ transplant helps and gives hope to thousands of people with failing organs, helping them start a new life.

“Definitely talk with your family and let them know your feelings if you want to become an organ donor,” Eaker said. “Realize you can’t take your organs with you after you die. There’s nothing you can do. If you can save up to eight people, why not?”

After Molly’s death, Eaker and his mother-in-law helped start the Molly Pearce-Eaker Foundation to commemorate her life. The foundation was made to educate people on organ donation, and help provide financial assistance to friends and family of those in need of a transplant so they go can visit them while they wait for another chance at life.

In the summer of 2013, Eaker and his long-time friend Bob Amidon, along with Molly’s best friend Lauren Henderson, embarked on a journey to raise awareness for organ donations.

Eaker and Amidon traveled 10,000 miles across the United States in 26 days, visiting 10 different cities. They traveled in Amidon’s car, which he drove the entire trip as his personal tribute to Molly, Amidon said. The team will produce a documentary film, “Molly’s Organ Trail,” based on their cross-country road trip for Molly. The documentary will also include the people they met during the first 10,000 miles of the journey. Henderson will be producing the documentary in hopes that it will be released in the spring 2015.

Their goal was to enroll as many people as possible with donatelife.net after teaching people how important registering as an organ donor is and to share Molly’s story with others, Eaker said.

“Organ donation is one of the most selfless decisions you can make in your life,” Amidon said. “The conscious decision to help another person with their medical struggles is so rewarding. If more people signed up to be organ donors, we could eliminate the death toll.”

Donatelife states that 90 percent of Americans claim they support organ donations, but in reality, only 30 percent understand the necessary steps to become an organ donor.

“It’s a way to keep her memory going, which I love,” Eaker said. “I want to raise more money, do more events, sign up more people and continue helping families in the hospital. I just really want to see the foundation grow and take off, and I think it will.”