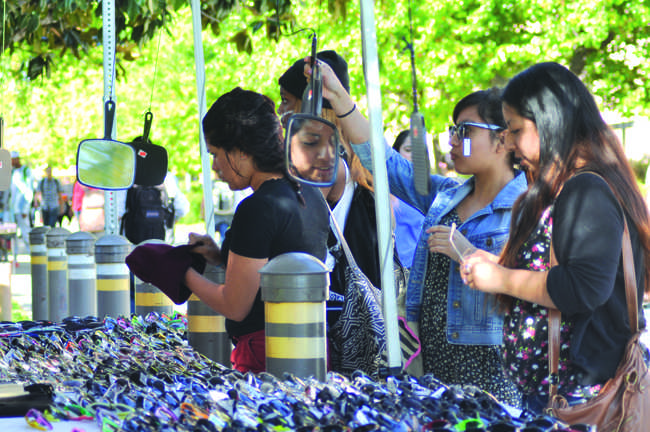 A variety of vendors set up shop at Cleary Walk in front of Bayramian Hall to sell everything from clothes to posters to students.

The Matador Mall will run until Thursday, where students can purchase a variety of items from 8 a.m. to 4 p.m..

One vendor, Kris Chan, travels up and down through Southern California throughout the year to sell his items.

“We travel a lot and go to any fair or any swap meet,” Chan said. “We go up and down from San Diego to Santa Barbara, so every time there is an event like this we show up.”

Chan has been selling at the Matador Mall for over 10 years. He sells a variety of jewelry, sunglasses, stuffed animals, clothes and other small knickknacks.

Stuart Sidwell has been selling posters and similar items since 1992 and has been at CSUN since 1993.

“A friend of mine who sells at schools alerted me, so I started selling at schools and ran into other vendors that were also selling, and that’s how I found out about CSUN,” Sidwell said.

He said that vendors used to be allowed on campus any time of the year.

“Now it’s a different set up.”

Sidwell has seen a number of different trends come and go throughout the years.

Royce Jountti, 20, sophomore marketing major said he was walking around campus and realized he needed some sunglasses.

“We’re always on campus, so it’s convenient,” Jountti said. “You usually have to go to the pier to find things like this.”

Therese Avalos, 20, sophomore Biology major was walking around campus when she decided to browse the Matador Mall.

“We’ve been here a few years, so we know it comes by a few times a year,” Avalos said.

Despite both Chan and Sidwell selling different items, both have an affinity for CSUN.

“We have the best customers here,” Chan said.

Sidwell said he enjoyed selling at the school.

“It’s a great group of students every year, it’s [almost] like a film school, so you get a wide variety of students,” he said.