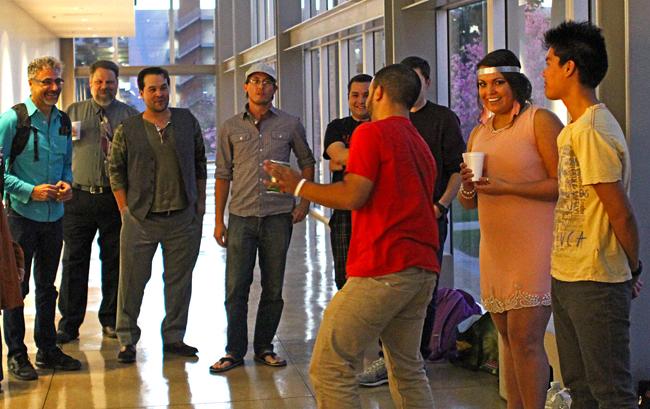 Several students and other participants dressed up in Roaring 20s-themed garb during the Communication Association meet and greet, which had a “Great Gatsby” theme.

Students interacted and socialized with professors and other students.

The rest of the students wore bow ties handed out by Marrissa Garcia, event coordinator and  communications studies major.

“It’s a great networking opportunity for students that have a passion for communication and need references, for grad school for example, and we’re open to other students with different majors to participate.”

The event opened with what Garcia called a “two-minute mixer,” which is like speed dating, so that students coud interact with other students and professors with whom they may not be familiar. This facilitated better communication connections within the department.

“I like interacting with professors outside of the class setting,” Garcia said.

She wants to be an events coordinator professionally and organize red carpet-style private parties.

As an added bonus for Garcia the event is helping with her professional aspirations.

“It takes a lot of people to put on events and I have learned how to cooperatively work together.”

They played games which added to the party-like atmosphere. One game was played with the use of an app called “Heads Up,” which is similar to charades. In the game, a player holds up a smartphone to their head with a word or phrase. The rest of the group gives the player clues that others guess.

“I am happy to see people network and get out of their shells,” she said.

Diep, an art major, said her passion is political art where she is working on projects that call attention to the influence of the advertising industry. She hopes to shed light on marketing as it relates to food waste and unhealthy food choices.

“This semester we’re offering healthier food choices, as you can see with all the vegetables, because we used to mostly just have pizza and soda,” Diep said.

With about 25 people attending, the event on the second floor of Manzanita Hall was  successful at helping to build a closer community within the department despite CSUN’s commuter campus status.

Past events have been themed to zombies and superheroes. Last semester’s theme was “must love mustaches.”

Mustaches on sticks were handed out, all in order to encourage a light-hearted atmosphere among attendees.