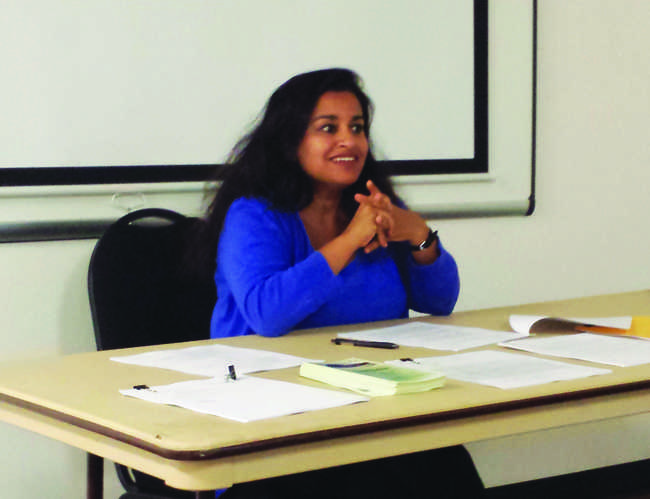 Anne Eipe, staff psychologist at University Counseling Services, told students that self-esteem is about building positive habits and being fine with the things you cannot control.

She defined self-esteem as a realistic appreciation of oneself.

“We all have strengths and weaknesses, but we need to accept ourselves for the things we can’t change,” she said.

Eipe said self-esttem is formed at an early age.

“Early childhood experiences can shape how we see ourselves,” she said.

Eipe told students to be in touch with what builds them up.

“Self-esteem is not dependenet on external things like grades,” she said.

Some advice she gave was as simple as doing things that positively affect your self-esteem.

“Notice something you are not doing and challenge yourself to do them,” she said.

“Having self-esteem is about having internal confidence,” Eipe said.

Valerie Leal, a volunteer for Joint Advocates on Disordered Eating (JADE), talked about her experience with Mirrorless Monday, and said she considered it a success despite one mishap with a student who didn’t like the covered mirrors.

Leal said the activity was done with good intention, and did not understand why some students took so negatively to it.

“It’s interesting to see the effect that this student had because she was so angry that the mirror was covered. She actually took down the covering without any regard to the notice that was on the paper,” Leal said.

Jackie Sanchez, a junior psychology major, talked about her experience at the Body and Image lecture.

“It was a positive experience and a great way for people to learn about body image for women and men,” said Sanchez. “I learned a lot about what media literacy is and the factor and role it plays in society. I got more out of the experience than I initially thought I would’ve gotten”.

“Because we live in a media saturated society, we have to be aware of media around us because they do affect our perception of the ideal body image,” Eisenstock said.

A poll published in the International Journal of Eating Disorders showed that 9 out of 10 girls are influenced by fashion and media perception of body image, in addtion to the influence of  family and friends.

“A stereotype that people have on the issue of body image is that it is only an issue for girls and women,” Eisenstock said. “However, boys are influenced by a different ideal which is to be buff.”

Eisenstock explained further the importance of media literacy for attendees. She said it can be used to access, analyze, evaluate, create, reflect upon and take action in all forms of communication media.

“The Get REAL digital media toolkit is a project designed for students to counteract media’s portrayal of body image, self-esteem, and unhealthy eating and exercise behaviors,” Eisenstock said.

Eisenstock explained that one way to take action against media’s portrayal of unrealistic body images is by writing a letter to that specific company or product that you see in an advertisement.

The lecture also covered the concept of the digital footprint, which is the digital trail left behind by what you do, where you go and who you know.

This phenomenon, according to Eisenstock, has become a crucial part of learning about body image because the way we present ourselves is how we view ourselves in terms of body image.

Susan Amer, a peer instructor for JADE, was in charge of organizing and scheduling the events surrounding Eating Disorder Awareness Week.

She was also involved with “Mirrorless Monday,” where the bathroom mirrors on campus were covered to promote inner beauty.

Some other activities that will be taking place this week include an outdoor screening of a documentary about male identity, workshops and  mindful yoga.