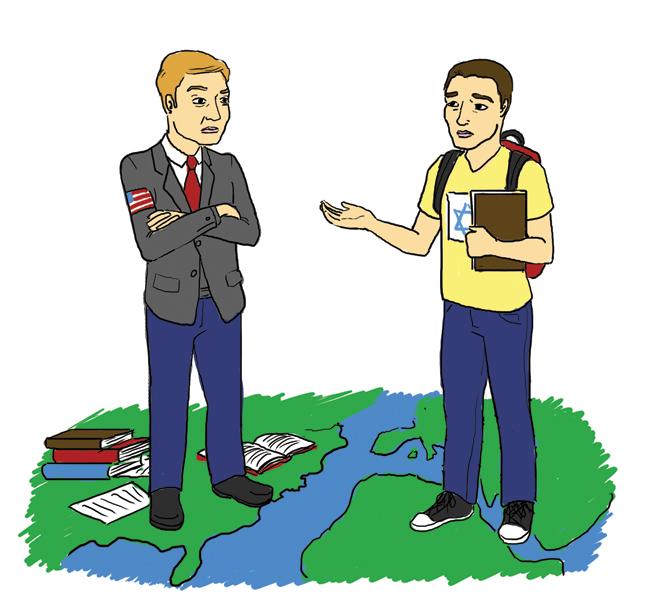 California State University (CSU) Chancellor Timothy White made a statement in early January denouncing a controversial move by a major academic association to boycott academic partnerships and investments made between American and Israeli universities.

In December 2013, the American Studies Association (ASA) joined a small, but growing number of academic associations calling for academic divestment from Israeli universities, which can mean cutting financial support to and ending partnerships and exchange programs with Israeli higher institutions. The ASA resolved to do so in protest of Israel’s treatment of Palestinians, which the organization described as violating “human rights and international law.”

In his statement, White said the CSU does not support the ASA’s resolution because such actions are not in line within the CSU’s goals as a higher education institution.

“Academic Boycotts violate the basic tenets of higher education including academic freedom and scholarly dialog,” White said. “Boycotts attempt to limit the unfettered creation, discovery and dissemination of knowledge vital to our tripartite mission of research, teaching and service. These characteristics are essential to preparing students with the analytical and critical thinking skills to lead in business, community, educational and civic organizations.”

According to the ASA website, the parameters of their resolution prohibits the ASA to enter “formal collaborations with Israeli academic institutions; scholars who are expressly serving as representatives or ambassadors of those institutions, such as deans, rectors, presidents and others on behalf of the Israeli government.”
The resolution does not call for a boycott of individual Israeli scholars and does not prohibit presentations, lectures or collaboration on research and publication produced on an individual level, the ASA stated.
Academic divestment is inspired by a worldwide political movement known as the Boycott, Divest and Sanction (BDS) of Israel, started by Palestinian organizations in 2005. BDS protests Israel’s controversial policies toward the occupied territories of Palestine — the Gaza strip and the West Bank — by encouraging individuals and organizations to financially and symbolically boycott the state of Israel. Its goal is put enough pressure on Israel to cease their policies.

The ASA’s national council’s academic boycott “emerges from the context of US military and other support for Israel, Israel’s violation of international law and UN resolutions, the documented impact of the Israeli occupation on Palestinian scholars and students, (and) the extent to which Israeli institutions of higher education are a party to state policies that violate human rights,” according to the ASA’s statement on their resolution.
Background
The discord between Israel and Palestine is a controversial, internationally contested conflict, and its development and possible resolution is significant to western nations.
Israel was created as a sovereign state in 1948 following the United Nations Partition Resolution, in land that was formerly British-controlled Palestine. Jewish refugees had settled there after facing oppression and holocaust in World War II, but after growing unrest and Israel’s declaration of independence as a state in May of 1948, the major conflict manifested in the Israeli-Arab war of 1948-1949.

An armistice achieved in 1949 set borders for two sovereign states and were honored until 1967, when Israel captured more land after engaging in the Six-Day War.
Since then, Israel has expanded its borders through controversial settlements which have been condemned in recent years by the United Nations, the European Union, Russia and China. These growing Israeli settlements are referred to as “occupied palestinian territories.” President Barack Obama stirred up controversy in 2011 when he supported re-establishing the 1967 borders, which would significantly decrease the size of the nation of Israel.
Apartheid Analogy: What’s in a name?
BDS organizations and activists defend their tough tactics by comparing Israel’s policies toward Palestinians to apartheid policies practiced by the minority white South African government against the black majority until 1994.

Using “apartheid” as a term to describe the conflict remains controversial for diplomats. However, on. Feb. 24, a United Nations special report on human rights in Palestinian territories that was leaked to the press characterized the situation as “amounting to segregation and apartheid.”

According to Reuters, the report’s author, UN investigator Richard Faulk, suggested that U.N. member states should consider banning produce imports from Jewish settlements in the West Bank. The West Bank is separated from Israel by a massive wall built by Israel’s stated concern for security from terrorists, but it has been condemned by the International Court of Justice as an illegal land grab.

Faulk wrote that Israeli policies such as “excessive use of force by Israeli security forces” and unlawful killings are “acts carried out in order to maintain dominance over Palestinians.” He also used the term “ethnic cleansing” to describe the Israeli occupation of East Jerusalem.

Pro-Israeli groups view the Israeli-apartheid analogy and the BDS movement as unfair and even anti-semitic. Israel is well aware of the BDS movement and in 2011, Israel passed a “boycott law” that penalizes individuals or groups that advocate boycotting Israeli products and culture.

Boycotting is considered a civil offense, allowing private companies or persons to sue people or organizations suspected of boycott activity. In a conference last week in Israel with American Jewish leaders, Benjamin Netanyahu referred to the boycotters as “classical anti-semites in modern garb” and called for Israel to “delegitimize the delegitimizers.”
Academic freedom
No American university has come out in support of academic divestment from Israel to date. The ASA’s resolution has been met with staunch opposition from dozens of American higher institutions such as the CSU, various University of California campuses, Yale, Harvard, Cornell and Princeton, as well as organizations like the Association of American Universities and the Association of American University Professors. All of the institutions cited academic freedom as their main concern.

“Like all of us, I am deeply concerned by the ongoing conflict between Israel and Palestine and hope for a peaceful and equitable resolution,” Harrison stated. “However, this boycott would suspend academic partnerships with Israeli universities. It would reject scholarship by Israeli academics if they acknowledged support by Israeli universities. In effect, the boycott tarnishes the gold standard of academic review and undermines academic freedom — the very heart of the academic enterprise.”

In the historical context of higher institutions and politics, the question of apartheid will remain crucial to the dilemma between academic freedom and social responsibility, making academic divestment all the more consequential.

The CSUN Foundation, which gives financial support to the campus, decided to divest an estimated $2.3 million from South Africa by selling off stocks or bonds invested in firms with ties to the country, according to a May 1985 Los Angeles Times article accessed through the CSUN database. At the time, the foundation’s stock portfolio was valued at $13.2 million, making their devestment about 17 percent of their portfolio.

For CSUN Mathematics professor, David Klein, Harrison and the CSU are being hypocritical when they highlighted academic freedom. Klein, an organizer and cofounder of the U.S. Campaign for the Academic and Cultural Boycott of Israel, asked why Harrison hasn’t denounced the denial of academic freedom for Palestinians, if academic freedom is Harrison’s concern. He cited events like the Israeli bombing of the Islamic University of Gaza in December of 2008, during the Gaza War, as putting fierce limitations on Palestinian students’ education.

“The denials of academic freedom are carried out at the extremes of cruelty,” Klein said. “And these violations only elicit yawns from the administration.”
Klein has previously been criticized for his palestinian advocacy website hosted through CSUN’s server, with many pro-Israeli groups characterized as anti-semitic and offensive. The university and the CSU declared his website could not be removed on the grounds of academic freedom.
Harry Hellenbrand, CSUN provost and vice president of academic affairs, does not see the act of academic divestment as a decision of right or wrong, nor as a support of either Israel or Palestine.

“Most people in the US who are opposed to the boycott is that they are opposed to boycotting higher learning institutions as a way to try and make political change,” Hellenbrand said. “Thats the principle they are working on, its not whether or not israel is “right” or if the palestinians are ‘right.’ The way you get good research and study and exchange done is when you operate in an atmosphere of security rather than operating in an atmosphere of threat, because people shut down in their communications and research.”
BDS and students
Academic associations and university administrators are not alone in their debate on the merits of BDS. In the past few years, student body governments at universities across the US have passed their own resolutions calling on their administrators to academically divest from Israel.

In California, the student body governments at UC Berkeley, Irvine and San Diego all passed such resolutions, while the Riverside campus reversed their resolution after one month last April.

UCLA’s Undergraduate Students Associations Council (USAC) voted down a resolution Wednesday morning which would call for their university to divest from companies profiting from the occupation of Palestinian territories, according to the Daily Bruin. The resolution targeted five companies– Caterpillar, Cement Roadstone Holdings, General Electric, Hewlett-Packard and Cemex.

The meeting began at 7 p.m. on Tuesday and ended Wednesday at 6:30 a.m. About 500 students attended the meeting and many spoke during the public comment portion, which lasted nine hours, according to the Daily Bruin. The newspaper’s video of the meeting shows students from the campus, as well as students who traveled from other UC campuses, who spoke passionately about their support or disapproval for the resolution.

No CSU student-body governments have had to vote on such a resolution. However, the Associate Students at CSUN and San Diego State University may soon find themselves in that position.

According to SDSU’s Daily Aztec, SDSU’s chapter of Students for Justice in Palestine (SJP) started campaigning in January to pass a divestment resolution. According to SJP West, a collective of SJP chapters on the west coast, CSUN will be partnering with SDSU to also try and pass a divestment resolution. CSUN SJP President Omer Malik had no comment on such a partnership or plans to pass a resolution at CSUN.

These student governments’ resolutions do not have any influence on the universities’ regents or trustees decisions and are symbolic at most. However, both the BDS movement and pro-Israel groups are watching these decisions, as each yay or nay reveals which narrative about divestment the public is investing in — a boycott of apartheid, or an act of anti-semitism.