Students, staff talk what college means to their lives, careers 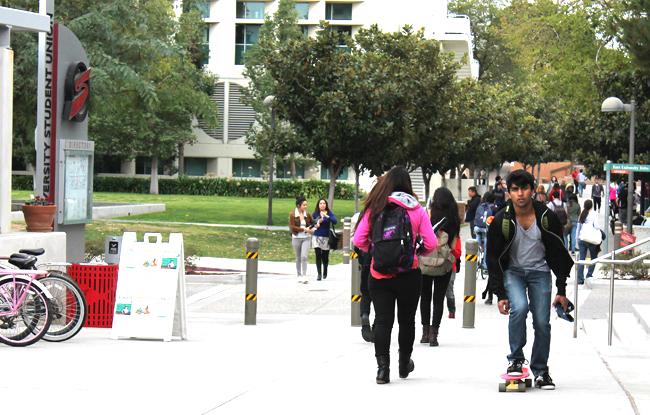 Students crossing the street between the Library and the USU complex which is one of several busiest intersections on campus on Wednesday, Feb. 26, 2014 in Northridge, Calif. (Photo Credit: Jennifer Carolina Oliva Pedroza/Contributor)

It is no secret that attending a degree-granting university benefits students in the long run when it comes to monetary factors.

But a recent study by the Pew Research Center suggests that a college education leads students to many other benefits in addition to earnings.

Forty-five percent of millennials end up married if they earned a bachelor’s degree compared to 40 percent who only completed high school. The high school graduates also lived with their parents more often at 18 percent, while only 12 percent of those who received a college degree lived with mom and dad.

Matt Eickhoff, program coordinator of training and development at the University Student Union (USU), agreed with the research.

He said going to college exposes students to people all around the world, and hence they will gain an insight into different culture and then become more open-minded and well-rounded.

College experience makes students more mature, learn more about themselves and understand what they want to pursue in their life, Eickhoff said.

William Watkins, vice president of student affairs and dean of students, said going to college broadens a student’s horizons because they can acquire a broader range of knowledge and get acquainted with different cultures.

“There are hosts of additional benefits beyond just getting the degree at college,” Watkins said. “When you grow up at college, you will communicate and work in a group better and learn how to use effective critical thinking skills.”

David Crandall, general manager of Associated Students (AS), agreed with Watkins and Eickhoff and said going to college was more about meeting different people all over the world and developing a personal philosophy of life.

Diane Hartjen, controller of AS, added that a college education is conducive to students’ personal development because it gives them an environment to participate in a conversation with other people.

The more a person interacts in an environment that encourages dialogue and discussion, the more great ideas he or she can embrace, Hartjen said.

“Going college links to your happiness because you make connections with people and have more choices to explore different things,” Hartjen said. “It also helps you get into your career path and find your dream.”

Not your major? no problem
Students who major in science or engineering are more likely to say their job closely connects to their field of study, according to the Pew Research Center. However, they are less likely to say a different major would help them prepare for the job they really wanted.

Hartjen, a health administration major, got a job in accounting even though it was not related to her field of study. She said her major indirectly helped prepare her for her job.

“I got this full-time job not only because my office experience, but also (because of) the classes I took in my health administration major,” Hartjen said. “The management skills that I got in class apply very directly to my workplace.”

“Because a hospital has to do with any types of business such as food service, housekeeping, nursing, accounting, manufacturing and personnel, I had to take a lot of different business classes,” Hartjen said. “There were a lot of commonalities between these classes because they were all involved in how to do with money and people.”

Crandall said his psychology major and minor in theater and drama helped him to prepare for his position of AS general manager.

“Psychology put into my work because I have understood how science works, how people acting in a group and how they think and feel,” Crandall said. “My theater minor was also useful because I understood how the lights works on the stage, how to make a presentation when I put in concert and what the script means in a play.”

Crandall added college majors don’t really matter because all majors can lay a foundation for a student’s learning ability.

“Learning how to learn is the most important part of the college education, and it is more important than the acquisition of any particular knowledge today,” Crandall said. “All of different academic disciplines that I studied, for example, scientific methods and literary analysis, could help me to learn the things later on.”

Eickhoff said other college experiences can also help students to prepare for their job.

“My major was music business, and it didn’t necessarily connect too much to what I am doing now,” Eickhoff said. “However, the skills I gained from college by getting involved in clubs and organization and having a job on campus that experiences help me to prepare for my job.”

“I know a lot of college graduates who are working now said they wish they would like to go back to school to have this experience again,” Dimirjian said.

Kim said he enjoyed going to college because he made new friends from classes and had the privilege of meeting a myriad of great professors.

College: then and now
Watkins, who got his bachelor’s degree in the early 70s, compared the importance of college degree between his generation and today.

Watkins said college education is more important and valuable today than in the 70s because of the continuing information technology revolution through the years.

Most students went to college in the 70s because they wanted to avoid participating in war, Watkins said.

“Since the time was involved in (the) Vietnam War, students faced going to college or going to the military,” Watkins said. “If you did not do well in college, you were subjected to the draft to fight for the country.”

Watkins also said having only a high school diploma used to be enough for students to get a good job, but nowadays, college is a must.

“In the 1970s, there were hosts of different kinds of jobs like a post officer and a manufacturer that high school graduates could start at the bottom and worked their way up and then had a very comfortable lifestyle,” Watkins said. “Now, it is impossible for them to enjoy that kind of economic growth, unless they have a bachelor’s degree.”

In line with Watkins, Hartjen said people could skip college education in the 70s because they could work in a company and be promoted step-by-step and then obtain almost equivalent money to those who had a degree, but it wouldn’t happen today.

“College education is a baseline requirement nowadays,” Hartjen said.  “Getting a college degree increases your earning potential, which makes you able to support yourself and less likely to live at home.”

Walkins added people nowadays endeavor to get rid of routine and menial jobs because they couldn’t even earn enough money to raise a family, let alone giving them a better living environment.

David Crandall, AS general manager, said people in the 1970s who sought for college education intended to have a better job in exchange for a more comfortable living environment.

“In the 1970s, we didn’t need to worry about having a job for necessities of life,” Crandall said. “However, paying the bill, food and shelter is much more critical today than in my generation based on the recent high unemployment rate.”

Debt, other disadvantages
Whether colleges are worth the investment is questionable, according to a 2011 CNN Money article. In the light of the current weak economy and rising tuition, students have no choice but to depend on loans to pay for their college education.

College graduates had an average of $29,000 in student loan debt, according to the article.

The Federal Reserve Bank of New York stated that 44 percent of college graduates in 2013 were underemployed, meaning that working at a job without the needing their degrees, according to an article in Atlantic Magazine.

Noah Garcia, 23, junior psychology major, is worried he might be one of these underemployed college graduates.

“I took out a loan of more than $20,000 to fund my college education,” Garcia said. “I don’t really want to take a job that doesn’t require a degree. I couldn’t imagine how I can settle my student debt if I only can make little money.

Christine Dimirjian, graduate student in chemistry, said there is a stark contrast between college-educated students and high school graduates nowadays.

“In the United States, the population and minimum wage are growing fast over the years.” Dimirjian said. “If you have a college education, you will better prepare yourself and become more competitive.”

Dimirjian said high school graduates should go to college under any circumstances because the consequence of not going to college is large.

In spite of a steep rise in tuitions, for the sake of better jobs, it is better for students to go to college with loans or by applying for financial aids, Dimirjian said.

“College education is worth every penny because every dollar you invested at college is going to help you make more money when you get a job with your degree,” Dimirjian said.

Walkins suggested high school graduates today should have at least two years in college training in order to keep pace with the income growth over time.

In the end college is worth it
Students would lose many other benefits besides getting a degree and earnings if they miss college, Eickhoff said.

“College education allows students to understand different people and form friendship,” Eickhoff said. “It is one of the biggest things for not going to college that students miss out that experience.”

Eickhoff also said students would miss out on a lot of leadership experience because there are many opportunities for them to get involved in a club or organization and take a job on campus.

“I think that having a college degree will open up more doors,” Kim said.  “Although there are always exceptions, like people who become millionaires with just a high school degree, the majority of us would benefit from going to college.”

Bassam Jamalalail, 22, senior biology major AS Senator, said a college education is worth it despite a progressive increase in tuitions over time.

“I am an international student so I need to pay the triple amount of the tuition that local students pay,” Jamalalail said. “But it is worth it because it helps me prepare for my career and understand different cultures.”

Hartjen said most students do not feel happy about going to college because it requires multitudes of hard work so they have to spend much time in studying at the expense of their leisure time.

The process of getting an academic degree is painful and difficult, but it is just a for short period of time, Hartjen said.

“After spending about four years at college, you will better prepare for your career, have greater potential of earnings and have a happier life,” Hartjen said.